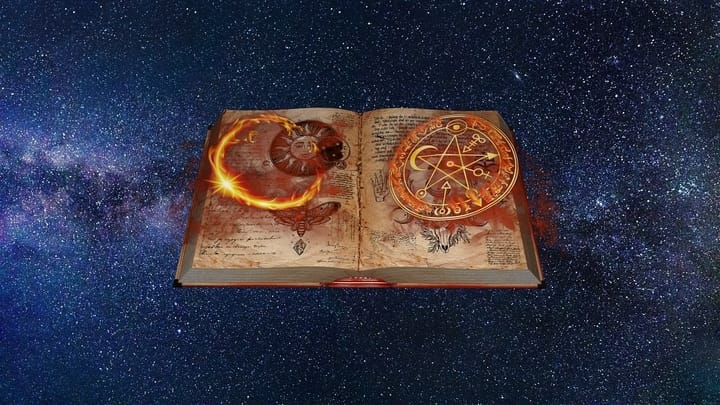 A grimoire is a textbook of magic. Other names such as ritual black book, charm book, and witch codex are also in use. Such manuals have been known throughout Europe since the Middle Ages. They were used in the pagan witchcraft tradition and in sorcery, and each adept composed his own grimoire.

Grimories contain instructions on how to make magical objects, such as talismans and magic circles, how to perform magic spells, summon angels and demons, their names and attributes, list spells for love, healing, destroying enemies, wealth and descriptions of other magical practices. Many such books and manuscripts were believed to have magical properties themselves.

Most grimoires are apocryphal writings that attributed authorship to famous historical figures to give the works greater authority and significance.

The word “grimoire” derives from the Old French word grammaire which derives from the Greek “grammatikos” meaning written word. This term began to be used in the Middle Ages for all non-church books, which as such were suspected as books of magic. Over time, the term was localized exclusively to those works that really contained texts of magic and the occult.

The oldest magical texts have been found by archaeological excavations in Egypt and on clay tablets from the library of Ashurbanipal from the 7th century BC, and records of rituals and invocations from the Sumerian city of Uruk, dated to the 5th and 4th centuries BC.

The Jews also had a developed occult tradition. According to biblical tradition, authorship of occult texts has been attributed since antiquity to Jewish patriarchs and prophets such as Enoch (Book of Enoch), Moses (Book of Moses) and Solomon (Clavicula Salomonis, Solomon’s Covenant of the 1st-3rd centuries, etc.)

In Hellenistic times, the influence of Jewish magic extended to Egypt, where it intertwined with Egyptian magic. This is evidenced by the Greco-Egyptian magic papyri found in the 19th century in the area of ​​former Hellenistic Egypt. During the time of Ptolemy, numerous hermetic and occult-magical manuscripts of Greek, Egyptian and Persian origin were kept in the famous Library of Alexandria.

The recognition of Christianity as the only official religion in the Roman Empire suppressed old beliefs that were branded as pagan and inappropriate for Christians.

The first European grimoires originated in the Middle Ages, but they also reflect an older Hermetic tradition, based on ancient traditions and Jewish mysticism. The spread of esoteric thought to the European continent began across the Iberian Peninsula with the appearance of Arabic and Jewish magical texts.

The most famous grimoires in the Middle Ages were:

With the penetration of neo-Platonist esotericism from the East, the fall of Constantinople in 1453, numerous magical manuscripts were created, the authorship of which is mainly attributed to King Solomon. During the period of the Inquisition and the witch hunt, many grimoires ended up on the “Index of Forbidden Books” (Index Librorum Prohibitorum).

The most important magical texts of the Renaissance and Baroque periods are:

At the beginning of the 17th century, the first printed grimoires appeared, making such literature more accessible to a wider circle of educated people.

Despite the advent of the Enlightenment, the development of science and rationalism, beliefs in magic and witchcraft survived in Europe. In this time, some new magical texts are created, most of which have the pretension to set the time of their origin in the distant past in order to gain credibility and an aura of mystery:

Some of the more famous grimoires from this period are:

One thought on “A Short Introduction to Grimoires”