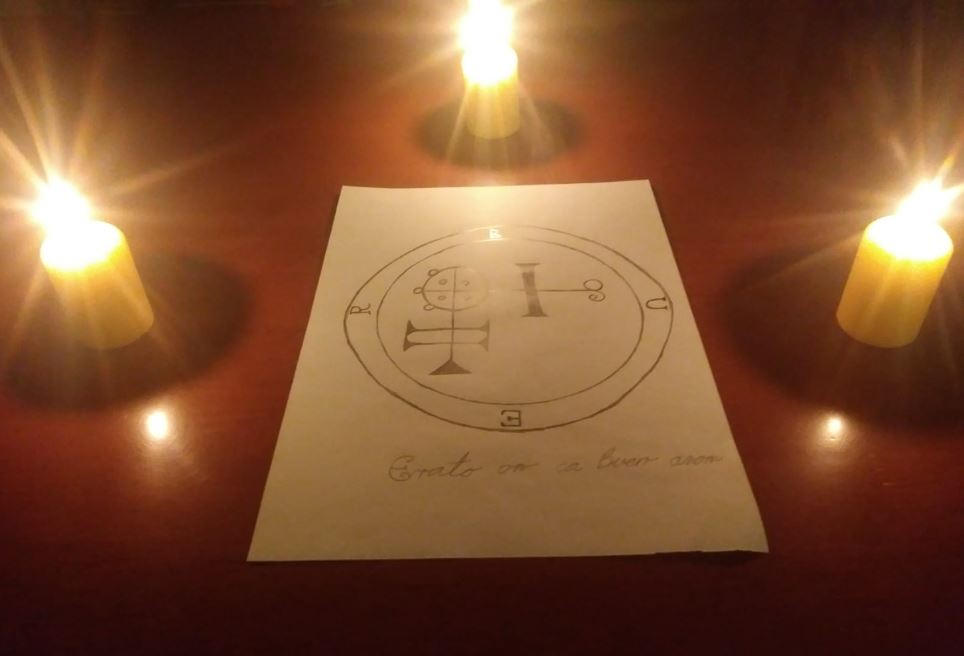 Not the prettiest of sigils I admit, but it served its purpose well. 🙂

That aside, I want to share some important advice about conducting rituals. It’s only two words long: “Let go.” But I’ll elaborate further. There is a point in the ritual when you simply need to let go of your inhibitions and allow the energies that you conjured express themselves in whichever way they please (as long as it’s not actually harmful).

If you have a very scientific, step-by-step instructions following approach to rituals it can limit your awareness of the present moment as you  remain stuck in your head. As I always say, the crucial part of any ritual is to get into a trance state. A trance state is a much more relaxed and subtle state of being, where you’re not over-analyzing things.

For example, I recently summoned Buer to help me recover from an injury. I got some candles and drew a sigil at start of the ritual. I wore my ritual robes as well and created a magically-conducive atmosphere with a quiet background and dimed lights. I began to chant Buer’s enn and called him forth. At this point I felt a surge of beastly energy take over my body and started vocalizing very beastly, lionesque sounds. Come to think of it, this indeed coincides with the physical depiction of Buer, a creature with goat legs and a lion head. I felt a rebellious power that would surely help me overcome the health impediment. After communicating my request to the demon I ended the ritual by sending it on its way.

As a side note, since the ritual my injury has improved significantly, in less than 24 hours. Was it Buer’s influence or not? It’s impossible to say for certain. But what I can say is that allowing myself to experience the ritual to its fullest capacity had an empowering effect. It made me feel more atuned with Buer’s attributes.

Some magicians will say that I effectively performed an invocation, rather than an evocation. I’m getting more and more tired of this distinction. All reality manifests within our consciousness. Whether we bring a spirit into the external or internal reality is less important than being able to form a powerful connection. Either way, you will cause a noticeable effect.

So I hope this helps those of you out there who are bogged down by the “science” of magic. Remember, magic is both a science and a creative endeavor. Just like an art form, you need some basic skills to get started, but only by unleashing the otherwise unconscious creativeness can an artist transcend his limitations and produce a work of genius. Treat your occult practice as an art and you will find this to be true.

2 thoughts on “A Piece of Advice on Doing Magic”