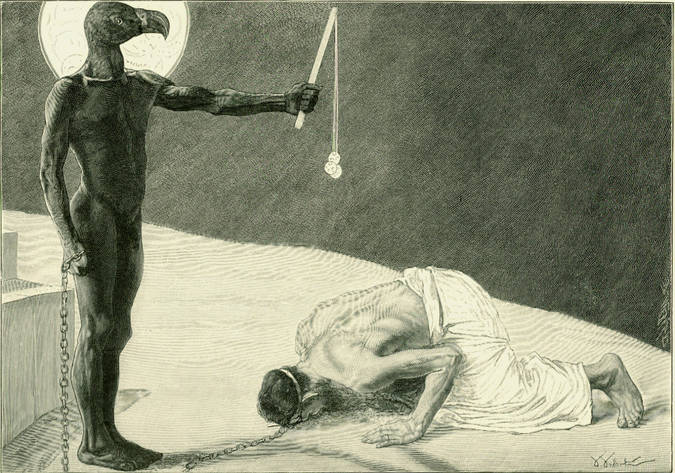 Demons are spiritual entities known in every traditional society. Most believers today has an instinctual fear of demonic forces, and they’re usually depicted as ugly creatures from Hell or a similar “Underworld”.

Materialists simply shrug them off as figments of imagination, just as they do concerning any other spiritual topic. But materialists aside, I want to provide a full answer on whether demons are evil by looking at various religious and occult traditions:

Demons in Greco-Roman world were seen as intermediary spirits between the world of men and gods. This is why the element of “air” has been largely associated with demons. As you can already suspect, they were not considered evil. While Judeo-Christian worldview contrasts angels (Heaven) with demons (Hell), the Greeks and Romans didn’t have a strictly evil Underworld that one would be cast into by behaving poorly. So the demons were perceived as spirits that live in the sky. That doesn’t mean the literal sky, but rather a subtle and morally neutral spiritual dimension.

They were also known as daemon/daimon, not “demon. This distinction has been preserved in historical thought, so when someone is speaking of “daemons” it’s usually the former, benevolent version. Most famous example of an ancient “daemon” was that of Socrates. Socrates claimed that his daemon was telling him how to behave properly. He equated it with good conscience. When the Athenians put him on trial for “corrupting the youth”, Socrates claimed that he was only doing what is right and that he wouldn’t change his ways.

If we consider that Socrates is considered one of the greatest philosophers of all time and certainly the most influential, the significance of demons cannot be underestimated. And was the  daemon that consulted Socrates evil? Well, probably not, if we consider that most of the moral lessons espoused by Socrates way back in Ancient Greece are the same ones that the majority of us instinctively consider correct to this very day.

All demons are considered evil in the mainstream Judeo-Christian tradition. Especially since the advent of Christianity demons have aquired a bad reputation. This is in part because Christians wanted to destroy old beliefs in many gods and spirits in order to promote their monotheistic belief in one, supreme Deity.

Since the polytheistic masses of the Roman Empire could not be completely turned away from their traditional beliefs and customs, Christians ruined the reputation of older gods by depicting them as evil spirits.

For example, Mammon, the ancient deity of wealth and commerce was widely worshiped in ancient cultures, especially by the wealthy Phoenicians. But Christians turned Mammon into a demon of greed and gluttony. The same thing happened with the goddess of war and fertility, Ishtar, widely worshiped throughout Mesopotamia. Jews and Christians transformed her into Ashtaroth, a fallen angel. In other words, a demon.

But something had to replace demons in the celestial hierarchy. Unlike our modern views on religion, people in Antiquity and the Middle Ages believed in a world occupied by various spirits. Since demons were sent underground, a gap was left between the world of men and the one true God. This gap was fixed by adding angels into the mix. Now we had two opposing spiritual forces, angels and demons battling out on a moral and metaphysical landscape for our souls. This ties neatly with the deepened sense of good and evil that came from Judaism and Christianity. Something that the bright, optimistic civilizations of Greece and Rome had little use for.

So if you’re following the Judeo-Christian outlook, demons are evil because they represent the worst aspects of our passions. Christians were at least in the early days of the religion very ascetic. They despised wealth, war, physical attraction and basically every natural instinct. They were focused completely on spiritual salvation. So any spiritual entity that was associated with a passion or desire were deemed as evil soldiers of Satan trying to prevent our salvation.

Demons have a very important in occultism, especially ceremonial magic. Demons are evoked and invoked by the magician to grant him powers or help accomplish a task. As far as the question of whether demons are evil or not is concerned, opinions differ widely in the occult community. Some magicians believe that demons are evil, but that they can be very useful if the magician knows how to control them.

This idea has been propagated by occultists from the Judeo-Christian milieu, as can be seen from grimoires such as The Lesser Key of Solomon and Grimorium Verum. For this reason it’s easy to find specific rituals for binding the demon to the will of the magician while preventing the demon from causing harm. So a protective magical circle is made on the ground in which the magician remains during the ritual and a triangle is also made in which the demon is summoned. Presumably, the demon cannot escape the triangle.

On the other hand, some magicians believe that demons are benevolent or at least neutral, like daemons in the classical, Greco-Roman sense. While the former magicians typically use very complex rituals as can be read in the before-mentioned grimoires, the latter are not as worried about demons causing them harm.

For example (post)modern chaos magick is much more relaxed on this topic. Demons are seen as useful, and there is very little danger associated with summoning them. The only danger would come from a psychological effect in case a would-be magician is predisposed to mental issues.

Demonolatry is essentially the worship of demons. Demonolatry has a long, very much hidden history because any such religious tendencies would be frowned upon or cruelly eliminated in a Christian society.

Demonolators differ in their moral outlooks, but most of them consider demons to be benevolent spirits. At least for those who worship them and conduct proper offerings. Some demonolators consider them as ancient deities (i.e Ishtar = Astaroth), but they chose to worship them in the demonic form. Usually because the demonic form is better suited in the culture we live in.

It’s harder to create an emotional and spiritual bond with an ancient deity as depicted by people who lived in thousands of years ago in a completely different culture. For a Westerner who grew up in a society dominated by Christianity, Astaroth is more real than Ishtar even if it’s in fact the same spiritual entity.

Islam has taken most of its ideas from Judaism and Christianity. After all, Muslims consider Jesus as one of their religion’s main prophets. So demons are also part of the mix, and they’re considered evil. However, demons are known as jinn (evil spirits) and are mentioned in Koran as such.

The opinion on demons varies to a large degree among contemporary occultists. Some are still very much under the influence of Medieval Christianity, while others have moved to a more liberal interpretation. It really depends on one’s moral compass. If one person thinks that wealth is evil then Mammon (a demon of wealth) is certainly evil. But if another person believes that wealth is good or neutral than Mammon is not evil. Since we no longer share the same moral system, there are inevitable disagreements on this issue, just as there are between conservatives and liberals in the political arena.

Furthermore, ever since the Enlightenment many occultists have speculated that demons are purely psychological forces, dormant parts of the brain that can be activated by performing a ritual. So it’s not really a spiritual entity but simply a mind-potential that is activated by summoning a particular demon. For example, summoning Mammon activates the part of the brain that is wealth-oriented. This is the opinion of many chaos magicians, who are not bound to any Tradition. Chaos magicians even claim that we can create our own servitors, making the whole ordeal very open to interpretation.

Whether demons are evil or not depends on one’s personal moral compass.

Demons are usually summoned to help with some task. If you believe that this task is evil, than obviously the demon is evil as well. Or is the demon perhaps forced to comply and therefore merely a victim of the magician’s power? That’s an even more serious question.

In either case, there is no definitive answers, except for the answer gained through personal experience. Or you can rely on one of the many traditional religions for interpretation.

Want to discover the unlimited potential of demonic magic for yourself?

I recommend this powerful course by E.A. Koetting, the most famous black magician of our times: