Asking whether demons are real is pretty common, perhaps not the best phrasing of the question. Because whether something is “real” or not depends on the subjective criteria of the person asking that question:

In either of these cases one could say that demons are real in some particular sense. The only case when most people would agree that demons are not real is if they’re solely the product of human imagination. Like a flying spaghetti monster, the favorite Dawkins metaphor for the absurdity of God, demons could also be purely fictional.

HOWEVER, even in that case, if one judges the existence and nature of a phenomena through the effect that it has rather than it’s ontological state, demons can be considered real even if they’re “fictional”. Because the word fictional loses it meaning in that context.

So if someone believes in a demon and acts in accordance with that belief, then the demon is manifesting in reality and therefore obviously exists in some shape or form. Just like the Christian or Muslim God could be entirely made up, but believers still built magnificent cathedrals, joined the Crusades, burned witches, had visions of the deity etc. In their own lives, the God was almost supra-real, the Truth itself. 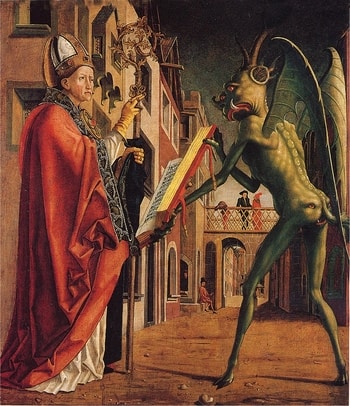 Now we arrive into metaphysical territory, since we have to address the nature of ideas. According to materialists, ideas are products of the brain. But according to traditional thinkers like Plato, the brain is merely a recipient of ideas. Ideas themselves are eternal, and they exist in a perfect spiritual state which is completely independent from physical reality.

Ideas manifest within the physical world, albeit in an imperfect form. For example, all of us are physical representatives of the idea of the human being. But none of us are the perfect representation of the human being as such. This human being exists as an idea, an Ideal. The same could be said for any other manifestation, such as truth, courage or a demon. If everything we can see is a manifestation of an idea, then we shouldn’t judge whether it’s real or not at all. It’s manifested, therefore its fundamentally part of reality.

This was a small, but necessary digression. Because if something is purely an idea, a materialist is easy to dismiss it. But a traditionalist thinker would do no such thing, because idea comes before physical reality, not the other way around.

In other words, physical reality can only exist in the mind of God, as an idea. So ideas that are manifested completely as physical or spiritual or psychic are all equally true. In fact, according to this metaphysical model, those phenomena which aren’t manifested in purely physical form are even superior to those that are.

Humans are superior to animals because they are both physical and spiritual. While the behavior of animals is completely dictated by their bodily functions, humans are able to exercise free will within the material world. Likewise, we generally value the spirit more than the body, viewing the body as a vehicle that is driven by the soul/spirit. So if a demon is not a physical entity, it doesn’t mean that it’s inferior or unreal. That would be the same as saying that humans are nothing more than animals, which is exactly what a materialist believes. That humans are animals with a highly developed brain.

From this explanation, it’s pretty clear that our own subjective view of metaphysics has a part to play in how we perceive the reality of demons. What is purely fictional for a materialist is entirely real for a traditionalist thinker. This is why every traditional culture has a place reserved for demons and various other spiritual entities. This is also why pagans could easily attribute natural phenomena such as thunder, earthquakes, war, famine, love and fertility to different deities. They were simply attributing a physical effect to a spiritual source. Unlike materialists, who’d attribute these physical effects to some other set of hidden physical effects and stop there, without ever explaining the real cause of any of these effects.

Demon as a Projection of the Psyche 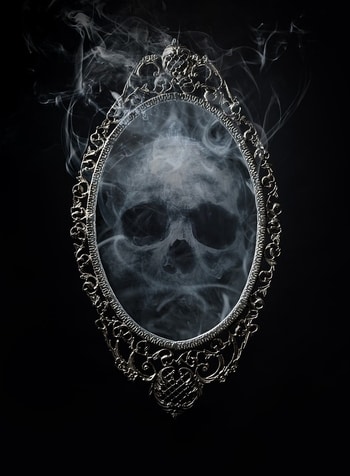 If we accept that demons are real in some sense or another, we have to go further and explain their behavior. Because if they are not free agents that can make their own decisions, then they’re little more than animals.

Well, this is where we encounter difficulties. Since every demon represents a certain aspect of the human psyche (regardless of its physical status), an ambition or a passion, we have to wonder if that’s really the limit of their nature and influence – to be a picturesque projection of these psychological elements.

In that sense, a demon would not be real as a subject, but rather as an objective potentiality that resides within the human spirit. By communicating with a demon, a magician communicates with an isolated and extracted aspect of his/her Self.

The reason why any aspect of the psyche is presented in a demonic form is because it makes the communication easier and the imprint on the conscious mind more powerful. It’s hard to communicate with an abstract idea after all. Which is also the reason why deities were depicted in physical form in most religions since time immemorial.

Demons will often look like what one would expect a certain ambition or passion would look like if extracted and separated from its benevolent attributes while the powerful, selfish and dark attributes are amplified. The reason for this isn’t entirely clear, because the creation of a demonic image is an unconscious process. One doesn’t construct it through a conscious effort, it manifests on its own, as an inner vision in a trance.

This is why a description of a demon, a painting and its sigil resonate with millions of people who stumble upon it although it was formally created by only one person. It’s a universal archetype, in similar vain to Jung’s Shadow or the archetypal hero’s journey which leads to a serpent, another common mythological creature.

Demon as a Physical Creature

According to some religious teachings, such as that of the Catholic Church or even the religion of Ancient Egypt, the afterlife is very similar to the life on Earth. The body is resurrected in another plane of reality. In Christian mythos, this plane is either Heaven or Hell. If we are dealing with a physical plane, than its inhabitants are also physical in nature.

If the Goetic demons, known as Dukes, Lords and Presidents of Hell belong to the same mythos, than they could be interpreted as the actual physical inhabitants and rulers of Hell. Upon visiting the Hellish realm, one would indeed have a chance of seeing with real eyes a man riding a Dromedary camel, preceded by men playing trumpets. This would of course be the King of Hell, Paimon.

And many other strange creatures would inhabit this plane, along with the millions of humans who’ve traded their soul to the Devil. I’m not an adherent of this fundamentalist interpretation, but it remains an unlikely possibility.

Whether demons are real or not is also a question of historical accuracy. It’s no secret that early Christians destroyed pagan temples and transformed many pagan gods into demons.

Entirely benign deities that were worshiped by normal communities of peasants, traders, craftsmen, warriors and priests throughout the Middle East were depicted as demons.

My favorite example is Astarte/Ishtar, goddess of fertility, sexuality and war that was celebrated in many cultures, from Ancient Greece, Mesopotamia to Egypt. Under Jewish and Christian rule her cult went underground. She became known as a terrible demon Astaroth of Ars Goetia, riding an undead dragon and holding a poisonous viper in one hand. Obviously something to be feared and despised rather than celebrated.

Many other Middle Eastern gods and goddesses were corrupted in the same manner, such as Baal and Mammon. They weren’t stripped of their power, but by turning them into demons it became politically incorrect to associate with them in any manner. These conquered deities became part of the occult, secret tradition that conspired against the rule of the ignorant Abrahamic cults for centuries. Instead of defending the old gods in their benign form, the occult accepted and utilized the new form that was given to them by their enemies. These aren’t the only examples.

This negative assimilation is not exclusive to the Judeo-Christian culture. The Zoroastrian pantheon has also assimilated deities of conquered peoples by transforming them into inferior, dark forces that stand in opposition to the publicly accept Ahura Mazda, the God of Light.

Demons are part of almost every spiritual tradition on the planet. Some demons have their origins at the very beginnings, others are old gods that were transformed over time into demons by the enemy cults. This is the indisputable historical truth.

As far as the realness of demons is concerned in a (meta)physical sense of the word, there isn’t a clear cut answer, nor will there ever be a consensus. The reality of demons could be physical, spiritual, psychological or a combination of all three.

Evidence for demons could seem fictional to a materialist, and entirely valid to a spiritualist or someone with a more Platonic metaphysical outlook, where eternal Ideas are at the epicenter of reality. Until all people agree to have the same worldview, the nature of the demonic will also be interpreted in different ways.

Hopefully this short essay has given you some further insight into the complexity of this question. From there on, it’s up to you to make your own mind on this always controversial topic.