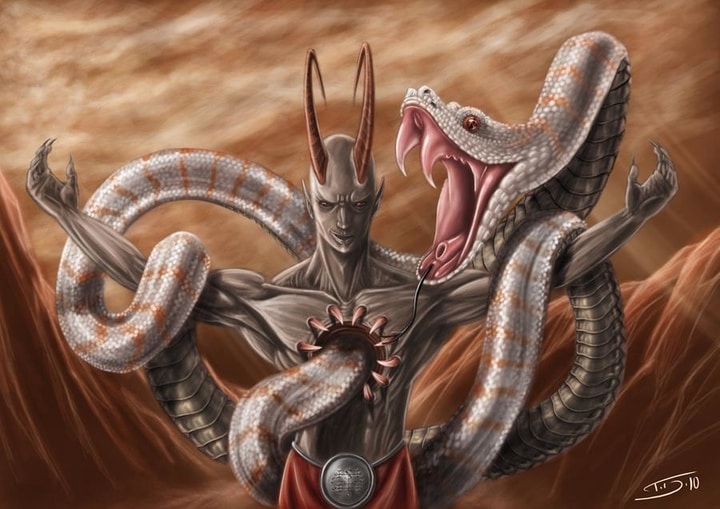 Demon Andromalius is the 72nd demon described in The Lesser Key of Solomon. He’s also mentioned in Michael Ford’s Luciferian Goetia. This demon has many purposes, as explained in the Goetia description:

From “The Goetia: The Lesser Key of Solomon the King” (1904) Written by S.L. MacGregor Mathers

ANDROMALIUS.—The Seventy-second Spirit in Order is named Andromalius. He is an Earl, Great and Mighty, appearing in the Form of a Man holding a Great Serpent in his Hand. His Office is to bring back both a Thief, and the Goods which be stolen; and to discover all Wickedness, and Underhand Dealing; and to punish all Thieves and other Wicked People and also to discover Treasures that be Hid. He ruleth over 36 Legions of Spirits. His Seal is this, the which wear thou as aforesaid, etc.

From the Luciferian Goetia ( 2007 ) – Written by Michael Ford

This is Andromalius’ seal or sigil, that is used in order to bind him to the magician’s Will during a summoning ritual: 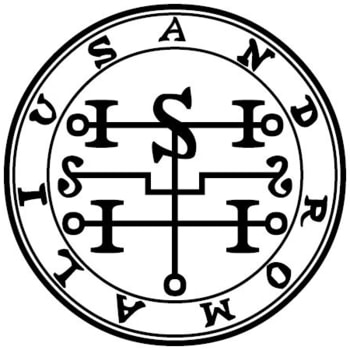 Based on the Ars Goetia description, Andromalius can help a magician with numerous tasks:

It’s quite obvious that Andromalius could be helpful to an ordinary person who was damaged by the actions of another person or an entire community and is seeking revenge.

Andromalius can also be very helpful to businessmen and lawyers during negotiations or in everyday relationships where the other person can’t be trusted.

On top of that, discovering hidden treasures is something that everyone could find useful. Especially if you’re looking for ways to earn more money or reach a spiritual discovery or a valuable idea.

As a picturesque example, I like to imagine Andromalius leading Daniel Plainview to discover oil fields in “There Will Be Blood” or the colonizers of the New World like Christopher Columbus and Vasco da Gama. In other words, if you want to summon Andromalius be prepared for an adventure.

Since Andromalius is an Earl, he isn’t as difficult to summon as Kings of Hell (Paimon, Asmodeus…) or Presidents of Hell like Mammon. Earls control a lesser number of spirits and thereby require a smaller energy expenditure on the part of the magician.

Therefore, Andromalius can be summoned with greater success even by beginner magicians. However, you still need to follow certain steps that any effective ritual contains:

1. Have a clear reason for summoning Andromalius

Only attempt to summon a demon if your goals are alligned with his attributes. There’s no reason to summon Andromalius if you require help with learning a specific skill for example. Demons like Furcas and Astaroth are more suited for that task.

Summon this demon if you need help with punishing someone who caused you harm, or you’re in middle of negotiations or you want to discover or retrieve something of value.

The most important part of a ritual is getting into a trance state in which you can communicate with a spirit. Ritualistic items can help you get into this state more easily. A demonic sigil/seal printed or drawn by yourself on a piece of paper is a very common ritual item.

You may also include candles, magic robes, incense, music, a dark and secluded room or forest environment etc. All of these will enhance the atmosphere and make your trance state more powerful and effective.

While summoning rituals can look very different based on the magician’s preferences, the items being used or the specific formula for a particular demon, there are almost always 4 stages that are performed in this order:

What you experience during the ritual might effect your future actions. Sometimes a demon will reveal secret knowledge that you can then use to change your destiny through your own actions. At other times you won’t receive direct answers but things will happen on their own.

In the first example, Andromalius might reveal to you a powerful idea that you can put into action and make a lot of money. In the second examples, he might lead you to this idea over the upcoming days, weeks or months.

Either way, it’s important to be confident that the ritual worked and that things are going according to plan. Doubt or lack of confidence is the most common self-imposed obstacle to receiving magical results. Be confident in your powers and they will manifest in reality.

This is a powerful ritual formula that I’ve used to summon Andromalius. Feel free to use it in your own practice:

Andromalius is a very externally oriented spirit, who can help with solving real life situations. He’s also easier to summon then most Goetic spirits, making him a good starting position for those who are new to summoning magic.

Keep in mind that this summoning ritual is just one that I’ve used with success. You can modify it by adding more ritual items such as incense or perhaps a dagger or a wand, which are pointed items that can be used to charge the sigil with more energy. Another suggestions is to use a crystal ball or a scrying mirror in order to improve the chance of a visual encounter with Andromalius or to receive the answers as a vision through these magic portals.

If you want to learn more about summoning demons, I highly recommend the Mastering Evocation course, which has over 13 hours of summoning instructions and examples from live rituals. Alternatively, check out my full list of recommended magick courses.