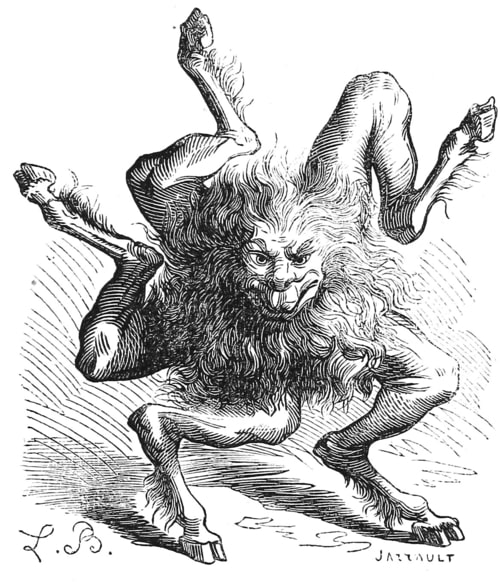 Buer is one of the most powerful demons mentioned in multiple grimoires and manuscripts. These are the most famous descriptions of Buer in grimoires and famous works of demonology:

Buer is a president of hell and a demon of the second order who commands 50 legions. His form is that of a five-branched star or wheel, and he moves by rolling himself. Buer teaches philosophy, logic, and herbal medicine He is also skilled in curing the sick and giving good servants. (Dictionnaire Infernal – Collin de Plancy)

Buer is a great president, and is seene in this signe; he absolutelie teacheth philosophie morall and naturall, and also logicke, and the vertue of herbes: he giveth the best familiars, he can heale all diseases, speciallie of men, and reigneth over fiftie legions. (Pseudomonarchia daemonum – Johann Wier, 1583.)

The Tenth Spirit is Buer, a Great President. He appeareth in Sagittary, and that is his shape when the Sun is there. He teaches Philosophy, both Moral and Natural, and the Logic Art, and also the Virtues of all Herbs and Plants. He healeth all distempers in man, and giveth good Familiars. He governeth 50 Legions of Spirits, and his Character of obedience is this, which thou must wear when thou callest him forth unto appearance. (Goetia – S. L. MacGregor Mathers, 1904.) 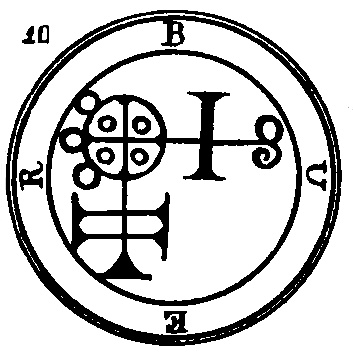 Many magicians have summoned Buer or attempted to do so in order to benefit from his powers. As can be seen in these manuscripts, Buer’s main powers are his ability to share knowledge on philosophy, logic and herbs, give familiars (helpful spirits or physical entities) and heal diseases or other negative parts of one’s body or psyche.

While the texts mention that Buer moves by rolling himself, the illustration itself is simply the artists imagination.

It was Louis Le Breton who created an illustration of Buer, later engraved by M. Jarrault, depicting the demon as having the head of a lion (or a mountain man) and five goat legs surrounding his body to walk in every direction. On the other hand, in Goetia we read that he comes in the shape of Sagittarius, which is as a centaur with a bow and arrows.

Regardless of one’s opinion, it’s important to notice that demons are spiritual entities. Therefore many occultists argue that they don’t possess one physical form at all. The only reason they would obtain a physical form is to temporarily appear to a person. Otherwise they are formless.

So it’s not unusual for different magicians to have entirely different visions of demons like Buer or Astaroth. Some people who claim they saw Astaroth in a dream or during a magick ritual claim that it appeared as a beautiful woman. Others claim that it’s an ugly person riding a dragon and holding a viper in his hand (the author of Goetia himself!).

Buer isn’t mentioned as being specifically evil in any text. Of course, opinions will differ based on who you ask. A mainstream theologian will probably claim that all demons are dangerous or evil. Church Fathers like St Augustine certainly did, as did Thomas Aquinas.

On the other hand, there are many practicing occultists who were helped by Buer, myself included. According to occultists like E.A Koetting, demons are morally neutral. All they want is to exercise their power in the universe It’s up to the magician to control the demon and utilize that power for benevolent purposes.

How to summon Buer

In order to learn more about Buer or to ask for assistance in matters that he can help you with (knowledge, healing etc.), it’s necessary to perform a summoning ritual.

There are various summoning ritual techniques that can be done. Sigil magick is an easy way to get in contact with a demon. What you’ll need is the demon’s sigil (sign), a quiet room and a few candles.

I shared a complete Buer summoning ritual in this article. So feel free to give it a shot when you’re ready and only if you truly need help with knowledge, healing or obtaining a familiar spirit to help you in these and other endeavors.

Lastly, here’s a short but quite intense demon documentary on Buer: