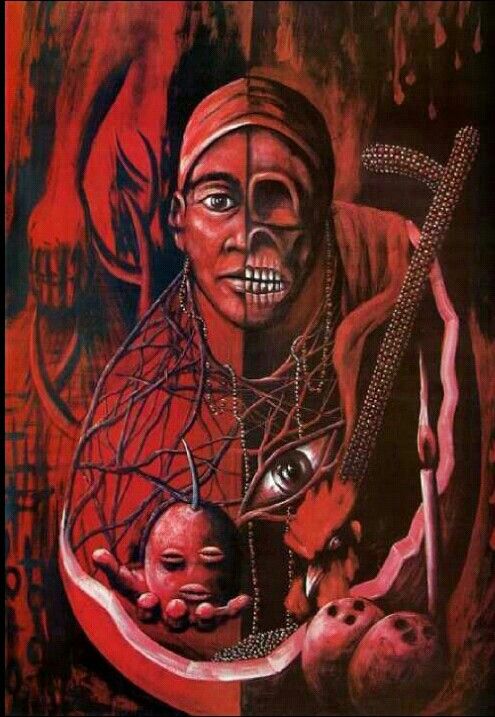 This article will help you invoke Elegua, a powerful ancient spirit that can procure many favors.

Elegua is an Orisha, a deity of roads in the religions of Santeria, Umbanda, Quimbanda, and Candomblé. All ceremonies and rituals in Santería must first have the approval of Eleguá before progressing. There is a story in Santería in which Elegua is featured as having the keys to the past, present, and future. This is why he is often depicted holding a set tof keys.

Elegua is considered an owner of roads and paths, or “Lord of the Crossroads”. His influence is significant in any area of life:

The final point is worth explaining in greater detail. It seems weird to say that we can “change the past”. If something has happened, there’s no way to change it, right? The common sensical answer is “yes”. But Quantum theory and the Simulation theory offer a different perspective on space and time according to which it might be possible to influence past and future events from the present.

Imagine our world as a video game, in which you can play or go to the menu and save and load multiple gameplay experiences. Each of these gameplays offers different trajectories and outcomes.

Technically, you’re always playing the same game, but the experiences can be different based on your decisions. In theory, Elegua might be able to act as that player who can save and load different gameplay experiences which produce different outcomes. The person who invokes Elegua is asking for that favor, since we humans don’t have that option.

How to Invoke Elegua

It’s important to note that invocation assumes that you want to become like Elegua. Or better yet, you want to embody his powers. Elegua can be invoked through rituals, disciplined prayer and other spiritual methods. I’ll share 3 methods that can be used with great success.

Elegua is often depicted as a black child or an old man, wearing traditional clothing. He is sometimes depicted with a set of keys or carrying a stone that represents his attributes. Here are the steps to this method of invocation:

2. A prayer invocation of Elegua

The previous method can be very intense which is why it’s rarely shared with inexperienced practitioners. Daily prayers are a safer and gradual way of invoking Elegua. It can take a few days, weeks or in some cases months of disciplined daily prayer but the results will come. You will begin to embody Elegua’s powers throughout the process. Here is a powerful translated prayer:

Elegua, the guardian of life and death

Whose decisions are always respected

By the best and worst of spirits

I humbly ask that you bestow

Good influence on my journey

And keep me from harm

Pray in this way upon waking up in the morning and before sleeping at night. The first signs that this invocation is working will be apparent by dreams that involve Elegua. Having said that, those practitioners that are not traditional members of Santeria will often be visited by a spiritual equivalent from their own religion or culture.

Another way to facilitate an Elegua invocation is to use ritualistic items. Some practitioners get better results by using visual sensory aids. If you’re one of them, give this a try.

This can be very exhausting but the benefits are often noticed immediately after the ritual. You will feel more confident in your decisions and  they will pan out better than usual.

Elegua is a very ancient spirit that is still worshipped and prayed to by millions of people. His energy is fresh and active regardless of whether we’re aware of it or not. By consciously invoking Elegua into your mind, body and spirit, your life journey can take a more rewarding course.

You can also ask for Elegua for a favor directly while performing an invocation. Or you can embody his energies first and then do whatever you wish with the assurance that you are being protected and guided in the right direction.

Want to learn more about performing magic rituals and improving your life? Check out these premium magic courses that will teach you everything you need to know.