Many dabblers in black magic have tried to open a portal to hell. Many have failed, while some, having succeeded forgot to protect themselves from the demonic powers they evoked. Instead, their minds and souls vanquished in the eternal flames of the underworld.

The gates of hell they opened remain a passage for demons. However, due to their lack of magical powers and knowledge, their portals were only half-done, allowing for certain negative psychic influences to enter our realm, but not the demons themselves. The summoners on the other hand succumbed to the wicked influences themselves and lost their minds.

For the demons that entered could no longer rely on the powers of Hell to retain their physical form. Instead, they had to find a host body to enter in order to survive. The body of the summoner, ill-protected against demons was the ideal candidate.

These amateur magicians brought a little more evil into the world, sacrificing themselves in the process. The areas in which they performed the portal-opening rituals are considered haunted as the airy feeling of spiritual disturbance lingers long after the deed. But that’s about all they were able to accomplish.

For those who are serious about opening a portal to Hell successfully and without endangering themselves, I’ve created this full step-by-step guide. Good luck!

How to ACTUALLY open a Portal to Hell

1. Find a group of summoners

In order to open a powerful portal to Hell it’s vital to work in a group. The group should consist of multiple powerful magicians channeling their collective energies into the creation of the portal.

The more powerful summoners there is in a group, the greater the results. Instead of a subtle, astral portal, limited to demonic forces which can only survive through psychic parasitism, truly vivid Gates of Hell may appear.

The power of the group will also determine how long the portal can remain active. Longer-lasting portals allow more demonic forces to enter our plane of reality.

Finding summoners for this project may prove to be very difficult. After all, not everyone is eager to risk their lives to meet Diablo in flesh. Your best chances of finding like-minded magicians is by joining or forming a cult of Satan worshippers.

Another alternative is to find a group of ambitious ceremonial magick practitioners. They might be interested in the project for the sole purpose of testing their powers. 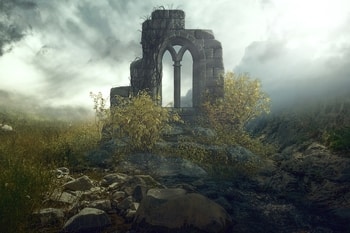 Another prerequisite is finding a suitable area for performing the ritual. The area should be quiet and desolate. There should be no distractions or unnatural channels of energy. Rural areas are better suited than urban ones.

Ruins, surrounded by nature are the best setting. It can also be extremely helpful to have a frame for the portal. Ruinous portals from the ancient times can be of much use here.

A good example is Emperor Hadrian’s triumphal arch. If you have any similar ruins nearby, see if they could be made use of in this manner. If not, you may have to travel to find one, but it could well be worth it.

There are also energy centers from ancient times scattered across the globe. They can provide a tenfold or more of magical energy than you’d otherwise be able to manifest. A good example are large megaliths such as Stonehenge and Drombeg stone circle in Ireland.

Some black magicians claim that performing demonic evocations is not advisable on sacred grounds. They mainly refer to Christian churches and their surrounding property. This is because the summoned entities may become hostile to the summoner for drawing them into the sacred place which is protected against them.

This isn’t true for pagan sacred grounds, such as the previously mentioned megaliths, since pagans didn’t have any strict moral and magical dualism in place.

In fact, many beings which are considered demons nowadays were worshiped by the masses in ages past. Such as the demon Astaroth, who was worshiped as goddess Ishtar all across the Mesopotamian region. So pagan grounds can be used for opening a portal without any dangers of this kind.

The connection between spiritual planes of reality and our own is most sensitive at 3 AM. While no one is sure as to why that is the case, thousands of supernatural happenings have occurred at precisely this hour.

We can only suggest that the line between spirit and matter overlaps at this hour, thus making us more aware of spiritual forces which we’d otherwise not come in contact with. Which makes it an ideal opportunity for conjuring a portal to Hell.

There is no strict dress code, but you should keep the clothing simple and uniform. A dark or red magicians robe is ideal. All magicians involved should be dressed the same, but there are two variations where two exceptions are accepted.

The first of the two exceptions in regards to colors may be the one or two magicians who plan on entering the portal. The other exception may be the leader of group, who will also light the fire as you’re about to read in the ritual instructions.

So either dress all the same or include one or both of these exceptions if you find it appropriate. Even though they aren’t necessary, it might be helpful to distinguish the roles during the ritual and avoid any confusion. 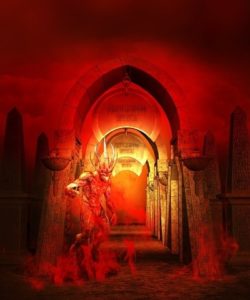 You’ve assembled a group of ambitious ceremonial magicians. You’ve also found the perfect place for the ritual and you’re all there at 3 AM. It’s time to begin the ritual:

Pour gasoline or another flammable concoction on the ground

If you are not using a stable arch or a portal, instead doing the ritual on an open field in nature, you will need to mark the area in which the portal will appear. In that case draw a circle on the ground with the flammable concoction.

If you’re using a portal or an arch of any kind, make a straight line from one to the other side of the portal instead. Obviously, make sure that the fire doesn’t spread any further, but use enough material to create a satisfyingly large flame.

Remove the surrounding grass and other debris if necessary. Also make sure that you’re legally allowed to be there, so that you’re not disturbed by anyone. If you’re far away from human settlements at 3 AM, this shouldn’t be too difficult.

Surround the portal and start to chant

Before lighting the fire, start chanting as a group this particular portal-opening chant:

On the 60th repetition all the magicians should kneel on one knee, hands stretched, palms facing the flames from a safe distance, with energy from the hands directed at the flames. Repeat the chant for 30 more repetitions in this position.

On the 90th repetition something will happen. Either the flame will soar higher, spirits visible to all or some members of the group will jump out of the flames or another supernatural occurrence will be felt. This fully depends on the power and synergy of the group that happens to be performing the ritual.

Can you enter the portal?

Obviously, entering Hell is not the most pleasant of picnics you can imagine. But if that’s the only way to quench your curiosity for the Underworld, by all means.

It’s vital that the portal remains open so that you have an exit in case you become homesick. Don’t wander off too much, because if your partners’ concentration begins to falter, you could remain trapped forever in a state of doom and frenzy.

Has this ritual been performed in the past?

We’ve personally performed this ritual with a group a while ago. The area was a desolate, historical ground in the Balkans.

The members of the group and the area in question will remain anonymous for reasons that are obvious to any magician. The social stigma involved with informing of occult activity at this level is higher than the ego boost from seeing the terror in the eyes of the commoners.

The effects of the ritual described were manifold and fully impressive for all who participated, which is why it’s the only ritual I recommend for directly opening a portal to Hell. There could be other rituals that are equally powerful or even more powerful than this one, but we haven’t tried them nor have we been made aware of them thus far.

We’ve confined the effects of opening the portal to our memory indefinitely, as we swore an oath not to speak of it with anyone outside our circle. If you wish to experience the effects, you have all the instruction you need in this article. So if this information has spiked your interest, either stop at the theoretical level or try it out for yourself. Either way, stay safe out there.

Disclaimer: The content on this website is for entertainment purposes only. In no way should the content be considered as advice, encouragement or instructions to perform any action.