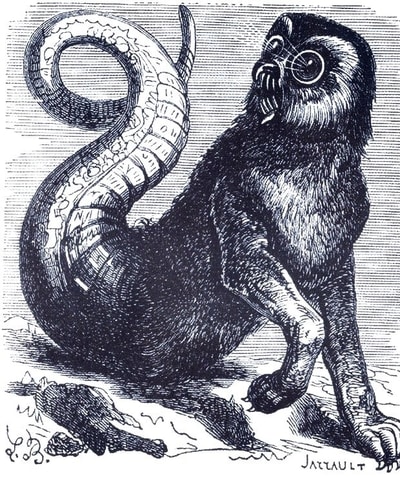 Amon is one of the more helpful and powerful demons of Goetia. Summoning Amon to assist you will require some preparation but it can be done by beginner and intermediate magicians quite often if the steps are followed completely. First of all, you need a good reason to summon Amon. Read again Goetia description of this demon and see if you ACTUALLY need his assistance or not. Summoning a demon just for the fun of it is foolish at best:

The Seventh Spirit is Amon. He is a Marquis great in power, and most stern. He appeareth like a Wolf with a Serpent’s tail, vomiting out of his mouth flames of fire; but at the command of the Magician he putteth on the shape of a Man with Dog’s teeth beset in a head like a Raven; or else like a Man with a Raven’s head (simply). He telleth all things Past and to Come. He procureth feuds and reconcileth controversies between friends. He governeth 40 Legions of Spirits. His Seal is this which is to be worn as aforesaid, etc.

As we can deduce from the text, Amon can assist with:

So if you need help in one or more of these three things, summoning Amon can definitely be beneficial for obtaining the said goals. There are two ways to summon Amon:

Amon may appear during day or night, but nighttime is the preferred setting for this ritual. Place an offering of raw meat next to the door of your bedroom before going to sleep. Make this the finest piece of meat you can procure. Then as you’re preparing to sleep repeat Amon’s Enn (words used to meditate upon a demon and call him for assistance): Avage secore Amon ninan.

You will very likely meet Amon in one or more of your dreams that night. If you have a habit of keeping a dream journal, your chances of recollecting this experience upon waking up will be greater. If you don’t have a habit of recollecting dreams, you might not remember the experience although it might have happened. In either case, this is one of the simplest way of summoning Amon.

As far as the meat is concerned, don’t throw it away in the morning. Keep it in the fridge or somewhere else until Amon has helped you deal with the issue or you no longer need his assistance. This offering is also the connection with the demon, “who feasts until satisfied”. When you dispose of the meat, the ritual is complete and Amon can go back to roaming freely in the astral plane.

Sigil magic is simple and powerful way of connecting with any demon. But unlike the night offering, it depends a lot on the magician’s ability to let go of other thoughts and focus solely on his goal and the sigil during the evocation. These are the steps:

Final Thoughts: How to Summon Amon

Amon is a powerful demon for getting to know your past and future more deeply. He can also help you sort out relationships that were harmed or destroyed in the past for whatever reason. As always, it’s important to have faith that the ritual worked, even if the demon hasn’t manifested in visual or audio form. As long as you perform the ritual correctly results will very likely follow.

Another pro tip is to follow your intuition when it comes to getting the things you asked for. Remaining entirely passive and expecting the demon to do all the work is often a failed strategy. The demon is there to guide you and assist you, but the magician is still often the main vessel through which the necessary actions manifest.

More powerful magicians can direct the demon in such a way that the magician can remain more or less idle while things come into place on their own. But until that point is reached, the magician often needs to get their hands dirty with the assurance that a positive outcome will follow shortly after. Hope this helps!

Do you want to discover the unlimited potential of demonic magic for yourself?

I recommend checking out this powerful course by E.A. Koetting, the most famous black magician of our times: