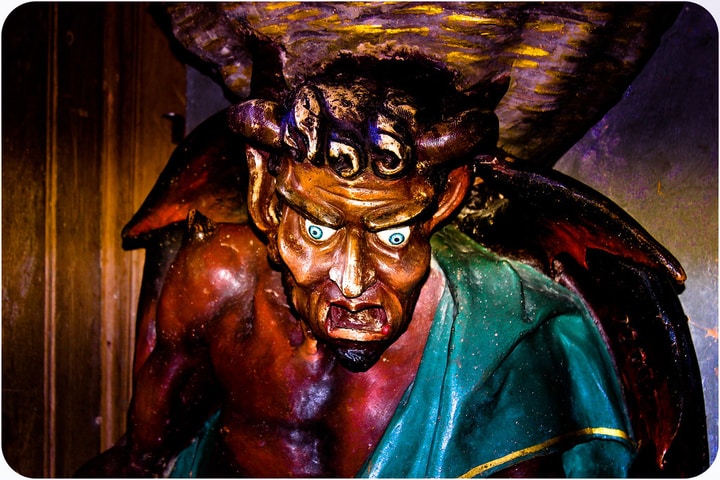 Asmodeus is one of the most powerful demons to be mentioned in the Bible, the Talmud and multiple grimoires, most notably the Lesser Key of Solomon. Asmodeus is also mentioned in The Testament of Solomon as one of the chief demons that King Solomon ordered to build the Temple of Jerusalem.

He is known primarily as the demon of lust and the king of the earthly spirits. Since I will be explaining how to summon Asmodeus, his description from Ars Goetia is more important than other texts:

The Thirty-second Spirit is Asmoday, or Asmodai. He is a Great King, Strong, and Powerful. He appeareth with Three Heads, whereof the first is like a Bull, the second like a Man, and the third like a Ram; he hath also the tail of a Serpent, and from his mouth issue Flames of Fire. His Feet are webbed like those of a Goose. He sitteth upon an Infernal Dragon, and beareth in his hand a Lance with a Banner. He is first and choicest under the Power of AMAYMON, he goeth before all other. When the Exorcist hath a mind to call him, let it be abroad, and let him stand on his feet all the time of action, with his Cap or Headdress off; for if it be on, AMAYMON will deceive him and call all his actions to be bewrayed. But as soon as the Exorcist seeth Asmoday in the shape aforesaid, he shall call him by his Name, saying: “Art thou Asmoday?” and he will not deny it, and by-and-by he will bow down unto the ground. He giveth the Ring of Virtues; he teacheth the Arts of Arithmetic, Astronomy, Geometry, and all handicrafts absolutely. He giveth true and full answers unto thy demands. He maketh one Invincible. He showeth the place where Treasures lie, and guardeth it. He, amongst the Legions of AMAYMON governeth 72 Legions of Spirits Inferior. His Seal is this which thou must wear as a Lamen upon thy breast, etc.

According to this powerful grimoire, Asmoday should be summoned by those who want:

So these are the reasons to summon Asmodeus according to Ars Goetia. But we also know that this is chiefly the demon of lust. Many magicians who’ve made pacts with Asmodeus have done so for favors in the dating realm and beyond (if you get the idea). Since this is a king demon commanding many legions (72) summoning him does involve some extra ritual steps. Don’t worry, I will mention all you will need in order to summon him successfully, starting now.

How to summon Asmodeus 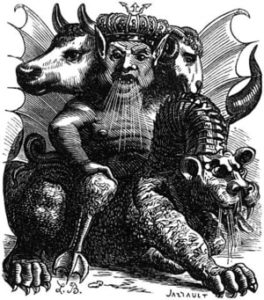 1. Have a good reason

Before you begin a summoning ritual, always have a good reason for calling upon a particular demon. I’ve listed the ways in which Asmodeus can help. If any of these things seem appealing to you then go right ahead.

Asmodeus, being the demon of lust prefers colors that excite passion. Red is the preferred color of this demon. Bring 3 average or large red candles.

Also wear a red magician robe. If you don’t have it and/or can’t get it for some reason, an alternative is to wear regular, red clothes. Also grab a piece of paper and a red pen. The last thing you will need is salt and a wand. If you don’t have a wand, use a freshly cut stick from a tree. Make sure that it resembles a wand in size and overall appearance.

3. Focus your mind, then create a magical circle and triangle

Find a quiet and isolated place to perform the ritual. It can be out in the open or in a room.

I recommend starting every ritual with 30 minutes of meditation to center the mind and clear away mental chatter. While meditating, listen to the Brain Power binaural beats on headphones to get into a higher mental state faster. I recommend using these specific binaurals for ritual and whenever you need significant mental clarity and focus in general.

Create a magical circle and a triangle fairly close to each other by pouring the salt on the floor.

Next, draw Asmodeus’ sigil on a piece of paper or parchment with a red pen/ink. As you’re drawing the sigil channel your energy into the sigil. This is your primary connection to the demon. Once you’re done, place the paper in the magic triangle.

Next, place one red candle on each point of the triangle and light them. Then get inside the magic circle. The circle is there to protect you from the demon, while the triangle is the place in which the demon will appear and stay until the ritual is finished. Get the three red

4. Channel Asmodeus into the magic triangle

With the sigil and the candles in their place, and you in the magic circle protected from the fury of Asmodeus, point your wand on the triangle/sigil and call forth Asmodeus by commanding 10 times out loud:

This is Asmodeus’ demonic enn, words that can be used to channel his presence in meditation or in this case a summoning ritual.

Once you’ve called Asmodeus and he’s trapped in the triangle, make your request. Throughout this process keep the wand pointed at the triangle. The wand is necessary to keep the demon in place and charge his energy from the astral plane.

Say exactly what you need assistance with. Be polite and respectful, but never bow down to the demon. You are now in the same place that King Solomon was when he ordered the demons to build the Temple of Jerusalem. It is time to be firm and act like a king/queen would act in presence of a loyal knight that stands before him/her.

Asmodeus might ask you to seal a pact, by offering to help you in exchange for a favor. Make sure to evaluate that proposal carefully. If he’s asking for too much, reject his offer and propose something different until you reach an agreement that is satisfying to both sides.

Don’t agree to anything that you’re not comfortable with. When you agree and make a pact however, always follow through because your word is everything in magic. By not following through, your future magic rituals will be less effective because the spirits will no longer trust you to follow through on your promises.

Once you’ve received satisfactory answers from Asmodeus, close the ritual by no longer pointing the wand at the triangle. As you release the channeling of energy through the wand, say out loud: “I release you Asmodeus. Go now and do my bidding.”

You can now remove all the ritualistic items and store them away. However, don’t destroy the paper/parchment with the sigil. Store the sigil in a safe location until your wishes have been fulfilled. When that is finished, destroy the sigil by burning it or using some other method that makes it clear that you no longer need Asmodeus’ assistance.

Final Word: How to summon Asmodeus

Asmodeus is a very powerful demon and his passionate energy can sometimes be overwhelming. He can excite passions in the magician, and that can be either good or bad depending on one’s character and life situation. Keep this in mind before summoning Asmodeus.

Having said that, Asmodeus can be of great service when it comes to learning a new skill, becoming a more powerful individual, receiving answers on various inquiries and becoming rich by “finding treasures”. In most cases that translates to business ideas and opportunities that come out of nowhere to the summoner. Hope this helps!

Do you want to discover the unlimited potential of demonic magic for yourself?

I recommend checking out this powerful course by E.A. Koetting, the most famous black magician of our times: