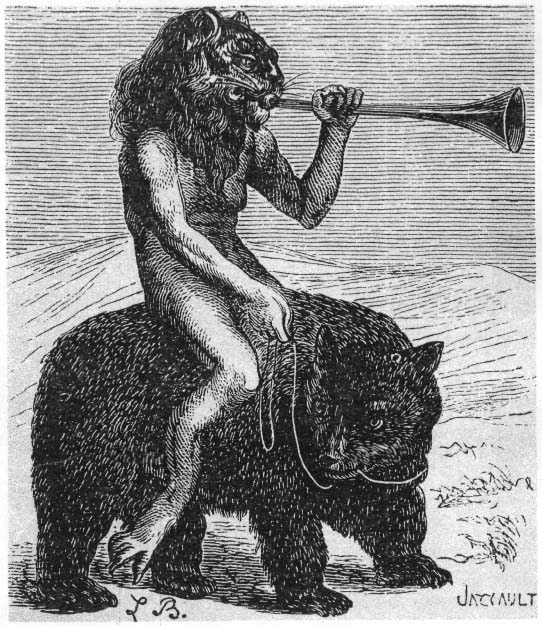 Purson (Curson or Pursan in the Pseudomonarchia Daemonum) is a fallen angel and currently a Great King of Hell being served and obeyed by 22 legions of demons. He is the 20th of the 72 Spirits of Ars Goetia, and was once a high ranking member in both the angelic Order of Virtues as well as the Order of Thrones.

He took part in the War in Heaven, serving as a powerful ally to Lucifer in his rebellion against God. So fierce was his retaliation against the Lord that it took a swarm of angels fighting in unison to finally push him over the edge of Heaven and to cast him down to Hell along with the rest of the treacherous angels.

Make sure to stay in control at all times instead of subjugating yourself to the demon. This is always a good rule to follow, regardless of the demon you’re trying to summon.

After falling from Heaven, Purson took the form of a lion-headed man in mockery of the majestic creature and symbol of the Lord. In the Dictionnaire Infernal by Louis Le Breton he is represented riding upon a great bear and wields a ferocious viper as a whip, both symbols of his dominion over savagery.

His arrival is preceded by the sound of many trumpets that drive dear deep into the heart of his enemies. Purson manifests to the summoner proceeded by noises of many kind, such as whispers, low vibrations or even freezing or scorching caress-like sensations.

Remember that the appearance of the demon is closely linked with the preconceived notion that the summoner has of the demon, providing him with multiple forms of manifestation. The feminine side of Purson is serpentine and is represented by vipers that you may sometimes be able to hear during the ritual ceremony.

Purson is a great demon to work with during scrying or channeling sessions when you have questions about the Divine Intelligences, or are seeking to better understand their nature. He’s a demon of natural sciences and can help you achieve great success in this area of knowledge and expertise.

According to Ars Goetia, Purson can:

Purson probes deep into the conscience of the human beings, pushing them toward their deepest, darkest objective. He can influence both mind and matter to bring you to the edge of sanity and desire.

He is said to bring true answers about matters both human and divine, things of Earth and the creation of the world. But he will guide those who seek his knowledge to answers they might not be able to handle. Ask only questions you came up with before starting the ritual. Never give in to the pull of new questions originating from his original answers.

You should procure an orchid, possibly harvesting it yourself. This orchid is the offering you need to make to Purson when the ritual ends. You can buy it, but if able you should harvest it yourself. Some demons, especially the ones with feminine energy such as Purson appreciate when time is spent gathering or harvesting offerings to them.

As long as you’re respectful to demons and take the preliminary precautions, as the ones mentioned here, you have nothing to fear as their primary intent is never to harm the summoner.

According to the Daemonolatry Goetia and the Lesser Key of Solomon, the best time for summoning Purson to uncover hidden things or discern the past, present, and future is on Tuesdays between 1 and 2 pm. The best nights to call upon him are between the 3rd  and the 12th of October, while others pray to him between the 27th of June and 1st of July.

As always, I should remind my readers that these are the best times, but you can perform rituals at any time as long as you’re able to set up the ritual properly and place yourself in the right mental and spiritual state. Having said that, here is a relatively simple invocation that you can try to connect with Purson:

This is a simple ritual to follow, although it requires some preparation as you can see. I should also remind you that you must have a valid reason for invoking Purson before you attempt this.

Demons assess your reason(s) for contacting them before the ritual has even begun. If your reason(s) do not align with their powers and attributes they won’t manifest.

If you force them to manifest through various commands and manipulations, it can lead to a backlash and the reverse of what you were trying to accomplish can happen. So make sure that your heart (and mind) are in the right place. Ceremonial magic requires unity of Will, Intelligence and Passion!

Having said that, if you’re a beginner and you want to connect with a demon for your personal benefit sooner and with better results, I can perform a ritual for you. Simply request a ritual and I will perform it for you in exchange for a small token of appreciation. See you on the other side!