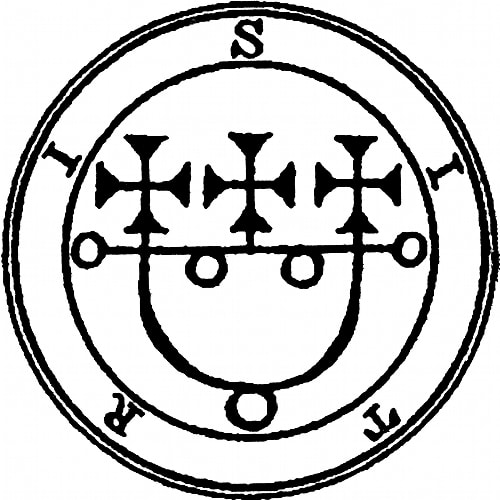 Many magicians find Sitri to be a very useful demon. After all, who doesn’t want to “enflameth men with women’s love, and women with men’s love”? Some guys spend thousands of dollars on PUA courses, others dedicate their entire lives to attracting just one lover. But with the help of Sitri you can potentially attract hundreds or thousands of partners with a charm that borders on the supernatural.

I’ve worked with Sitri in the past. Some rituals were unsuccessful but I was determined to make the connection. After consulting a magician friend who’s had huge success with women after summoning Sitri, I decided to use his summoning ritual. I’m happy to say that it worked! I was overwhelmed with the positive reactions and experiences.

Since I’m a gentleman, I won’t go into any details on the results front. But I will share with you the ritual itself so that you can get all the benefits that I have gained. Follow these ritual steps and you’re most likely to succeed:

To summon Sitri successfully you have to be in the right frame of mind. Sitri is a demon most concerned with sexuality. So in order to charge your connection with Sitri it’s really helpful to abstain from any sexual intercourse for at least one week.

That includes your handwork as well. Just refrain from touching your private area as much as possible. On top of that, don’t indulge in any imagery that can entice lustful emotions.

QiGong, Yoga and NoFap practitioners are all aware that retaining this energy can have amazing mental and physical benefits. But with what we’re trying to accomplish these are of secondary importance. We are just interested in charging up sexual energy. The longer you can refrain from expelling it before conducting the ritual the better.

Keep in mind that some people can abstain for months without much frustration. Others can only abstain for a few days before starting to go crazy. I recommend one week for everyone, and perhaps longer if you’re able to do it.

To conduct this ritual you won’t be needing any special ritual items. It’s a very simple ritual but effective nonetheless. The sexual build-up was the hardest part.

Sit in a comfortable position, whether on a chair or on the floor. You’ll only need a piece of paper and a pen.

Draw Sitri’s sigil on the paper. Once it’s drawn meditate on the sigil. Close your eyes, visualize the sigil in your mind’s eye. Allow yourself to get into a trance. Use binaural beats theta frequency if it helps you reach a trance.

As you’re getting into the trance or you’re already there start to chant Sitri’s demonic enn:  “Lirach alora vefa Sitri.” This is the correct pronunciation:

Repeat it while visualizing your sexual desires. Don’t watch them on a screen or do anything of the sort. This will weaken your energy rather than strengthen it. Simply visualize all of your pent up desires by using your imagination. The retention of sexual energy will really come in handy here as you’ll discover.

Then confidently say: “Sitri I summon thee! Become my ally, strengthen my lust and manifest my desires on the mortal plane!” You can follow up this statement by explicitly stating your desires one by one. These can be any relevant specifics: the type of women/men you want to attract, under what conditions, how you want the relationships to start, develop and end.

All of this can be helpful to Sitri in order to avoid any confusion. I’ve found that stating desires precisely improves the effectiveness of any spiritual work, including evocations. At the same time, you don’t want to do is tell the spirit how to exactly go about it.

If you say: “I want to attract the hottest woman in the club, take her home and have her cheerfully leave my apartment in the morning” that’s all fine and dandy.

But you don’t want to order Sitri on the exact way this will happen. You shouldn’t say: “I want her to be alone in a dark corner of the club and just waiting for me to take her home.” or anything like that. Sitri is a helpful aid, but he can’t pre-influence the conditions. No demon can.

Once you’ve stated your desire while in a trance-state, Sitri may or may not speak to you. Perhaps he will speak through you or you will hear his voice or simply feel a presence. Perhaps he’ll manifest in an illusory physical state. In the Lesser Key he is described as:

a Great Prince and appeareth at first with a Leopard’s head and the Wings of a Gryphon, but after the command of the Master of the Exorcism he putteth on Human shape, and that very beautiful.

Either way, you’ll have a general feeling if you’ve manged to summon him or not.

There’s nothing more to do after that than to tell Sitri to stay in your service until your desires have been fulfilled. That is his goal, and once he’s accomplished it you’ll set him free by destroying the sigil, preferably by burning it.

Having a demonic aid means better results, sometimes even instant results. But don’t expect that the love of your dreams will walk in your room while you’re playing Total War and start to get pleasantly nasty with you. The least you can do is put yourself in the position where Sitri can work his magic.

I recommend continuing to retain the sexual energy if you’ve come this far. This energy is attractive in-and-of itself. It will improve your chances of “enflaming” others and along with Sitri’s help will make you unstoppable. You can spend it on worthwhile encounters of course, but don’t spill the beans by yourself. It will just sap you of energy.

Consider your sexual energy as a chain that is holding Sitri, the sexual demon aid closer to you. If you release the energy, the chain becomes longer and thinner. Sitri will move further and further away and with him also the extra influence and power you could have in the sexual arena.

It took me 5 failed rituals until I figured a way to summon Sitri successfully. I had to consult an experienced magician friend to get this step-by-step guide.

Having adequate reserves of sexual energy is everything when you’re dealing with demons that are specialized in this area. It’s important to be tense, ready to jump at anything at the first sign of interest (metaphorically and actually).

Sitri will guide you in these situations to a favorable outcome. You’ll notice women (or men, depending on your preference) becoming more interested in you.

Improved eye contact, smiling favorably, biting their lips, even approaching you in a sexually enticing manner. These are the opportunities that Sitri will provide, and he’ll also provide you with the Devil-may-care confidence to give them exactly what they want.

Do you want to discover the full potential of demonic magic?

I recommend checking out this incredible course by E.A. Koetting, the most famous black magician of our times: