The occult is another word for “hidden” or “unseen”. But in popular imagination it has taken the form of vampires, necromancy, dark sexual rituals and other taboo themes. These themes also happen to involve a lot of blood, ritual sacrifices and other gory details. In fact, it’s not unusual to stumble upon conspiracy theories about the wealthy and powerful being part of the occult, working together to enslave humanity.

So it’s no wonder that many people think the occult is instantly evil. The real answer to that question however is that it depends. It depends on the particular occultist or occult group. The occult knowledge, just like any other knowledge is power. It’s a tool for producing a wanted effect. If the effect is meant to harm others, then it can be classified as “evil”, or “black magic”. If the occult knowledge is used for benevolent purposes than it’s obviously “good” and it’s often called “white magic”.

If you’ve familiar with Star Wars, you can draw a parallel with the Light and Dark Side of the Force. The Force is one, but how it’s used depends on the user himself,and that will determine whether it’s Light or Dark Side.

Why is the occult considered evil? 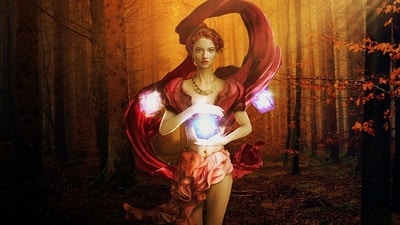 We have to make a distinction between Western and Eastern occultism (or rather esotericism) to understand why the occult is considered evil in the West.

In India, China, Japan and other Oriental civilizations the occult was never considered evil. That’s mainly because these cultures are steeped in metaphysics. We often consider Hinduism and Buddhism as religions that are parallel to Christianity and Islam, but that’s incorrect. Hinduism is not a religion, it’s a primordial Tradition.

In the East however, the orthodoxy never felt threatened by others spirituality. The same is in fact true for European paganism that preceded Christianity and other monotheistic religions. The pre-Christian Roman Empire was full of different gods and goddesses and various cults. No one cared if you worshipped Ishtar or Zeus as long as you followed the Roman Law. It all changed once the greedy priesthood of a single religion took reign and felt it was necessary to defend the only true God from other cults. As a result, many of these pagan cults transformed into what is today known as the occult.

Even more so, the Catholic orthodoxy was afraid of esoteric movements within its own faith, such as the Gnostics, Templars and Rosicrucians. Over time many esoteric elements of Christianity blended with older pagan themes to produce new occult teachings within these and similar groups. This blend of pre-Christian and Christian esotericism is evident in the legends of the Holy Grail (to learn more, check out Evola’s book Mystery of the Holy Grail).

In comparison, the Hindus never felt threatened by other forms of spirituality that sprung out of it, because they could easily be assimilated into its universal metaphysics, or would not be accepted by the masses anyway, since the masses accepted the Hindu metaphysics wholeheartedly and these movements would eventually die off on their own.

Hinduism and Buddhism also contain exoteric and esoteric doctrines and both of these elements are considered part of the orthodoxy. The exoteric teachings are for the masses, while the esoteric teachings are reserved for the initiates who are more spiritually inclined and capable of receiving Higher Knowledge.

In the West however, Christianity (especially Catholicism) fought against any secrecy because its message is strictly universal. So any “hidden teachings”, like those of the Gnostics were instantly dismissed and demonized. The burning of the witches and heretics reveals the extent of the Church’s disdain for secrecy.

This Medieval trend continued into the modern world and was propagated by the movie and music industry which accepted the distorted image of occultism mainly for shock purposes. It’s no wonder that with these multiple layers of falsity surrounding it, many people are convinced that the occult is evil by default! If this distorted image has waned over the years, it’s not because the masses have become more educated on what occultism actually entails, but rather because they’ve lost faith in there being any credible spiritual teachings whatsoever.

In other words, for the most part they still think that the occult is evil business, but one that’s based on superstitions and stupidity on the part of the magicians. However, their thirst for magic is evident in the obsession with TV shows like Game of Thrones, a thirst which they seem unable to connect with anything more than mindless entertainment.

Some occult practices involve performing acts which are considered in polite society. This can be literally anything, but as pop culture would have us believe it involves child sacrifice, sado-masochistic games and digging up graves among other notorious acts.

In Yoga: Immortality and Power, respected academic Mircea Eliade writes of an Indian sect dedicated to Shiva (god of destruction). Members of the sect consume feces, sleep in graveyards, practice necrofilia, eat rotten flesh and perform a host of other taboo practices. Sufis (Islamic esotericists) are sometimes reported to engage in taboo behavior as well, albeit not nearly as extreme.

One of the basic reasons for engaging in taboo behaviors is to get rid of any fears and attachments about one’s social status or even physical body. These followers of Shiva are literally destroying themselves by performing disgusting and harmful acts in the hopes of being reborn from the chaos into pure, unconditioned Being.

As Sheev Palpatine (notice Sheev = Shiva) says to Anakin Skywalker: If one is to understand the Great Mystery, one must study all its aspects, not just the dogmatic, narrow view of the Jedi.

This isn’t a necessary approach in all occult paths, but it’s integral to some left-hand paths. When observed from the outside by the uninitiated, it’s easy to understand why they would perceive it as outright evil, when they don’t understand the reasoning behind it. But if no harm is done to anyone else, and if any harm done to oneself is done with a higher goal in mind, it’s hard to call any activity as inherently evil. It would be similar to saying that playing football or driving a car is evil because people risk getting injured by playing it.

Why the occult draws in shady characters 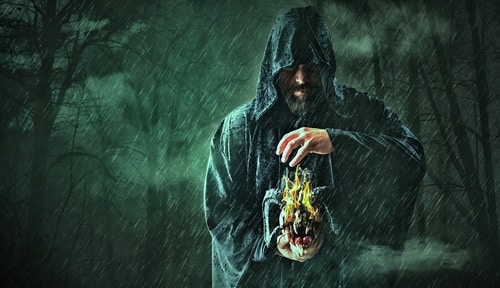 It’s because of the distorted image created in the West that perfectly legitimate esoteric teachings are sometimes drawing in people with evil intentions. Or at people who are not happy with the way the world operates and want to influence it with otherworldly powers, even in an “ends justify the means” fashion. We could say that the image of the dark side is attracting evil people. The occult teachings themselves are not inherently evil and never have been.

There’s also a psychological truth that people are either attracted or afraid of the unknown (or both). The unknown is perceived as threatening to the current conditions due to its very nature. Those who are happy with where they are at the moment and have no further ambitions to improve their lot in life will find the unknown to be threatening and unnecessary, while those who are not happy or are more ambitious but are unable to act upon their ambitions in a conventional manner will see it as a welcome opportunity.

This dual character of the unknown and human secrecy in particular is evident not only when it comes to magick but any other dealings in life and its perception is highly dependent on the observer.

There are obviously no scientifically conducted polls to answer this question. But by what I can tell most occultists are not evil. They are simply individuals who are interested in deepening their knowledge on spiritual matters.

The mainstream religions don’t provide them with the opportunity to do so, and so they dig deeper into ancient esoteric teachings to find the answers they’re looking for. In addition to that, many occultists are interested in self-development, becoming more powerful both physically and mentally as well as acquiring special powers and changing their lives for the better. As long as they’re not harming anyone else, it’s hard to label any of these activities as evil.

Having said that, I recommend never trusting anyone’s benevolent intentions, whether they’re performing obscure black-robe wearing adventures in the physical realm or only in their minds. And let’s be frank, it’s impossible not to engage in the latter. Every one of us is playing an occult game of our own, as long as we’re not allowing others to know of our true ambitions and the methods we’re willing to use to achieve them.