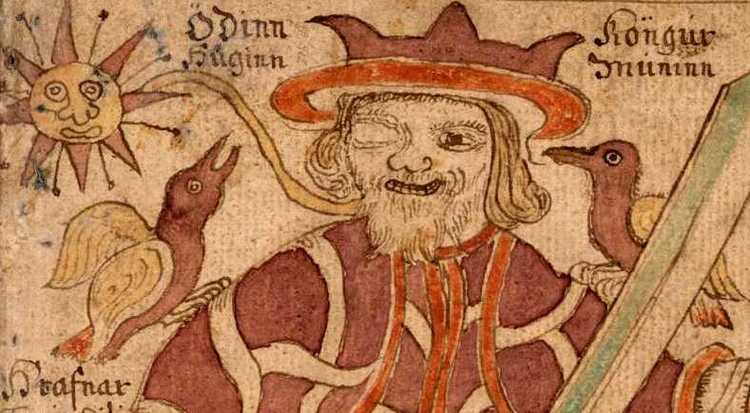 Communication with the gods has been one of the natural aspects of human life since ancient times. It is done by turning to the gods in prayer, by making offerings during a ritual or as part of a regular dedication at an altar. In this article I will share with you some practical ways to connect with Odin, a revered god in Germanic paganism.

The Psychodynamics of Offerings

Offering to the gods is considered as the first step towards becoming acquainted with the forces that rule not only in external reality but also in the inner universe, in the mind of the magician or a disciple of a given deity. By practicing the art of magic, the practitioner, first of all, discovers the god inside and then sees His manifestation in the outside world.

Human potential is incredibly huge. Different deities, be it Scandinavian, Egyptian, or Greek mythology, represent the magical forces that lie dormant in every person. They are the yet-to-be manifest potential of our consciousness, which can be awakened through ritual magic in order to become a conductor of the divine will. One of the main gods worshiped by the Norse was Odin, the all-father, warrior, and magician.

Magic works when we know how to transform our consciousness and for what purpose. Appeal to the gods is a powerful ritual that requires a clear understanding of how to interact with higher powers. Before making an offering to Odin, it is extremely important to know which of the higher powers he represents.

In other words, the experienced practitioner must know which aspect of his or her subconscious mind he or she is going to communicate with and what are the attributes of that deity. Odin, as the most revered god in runic magic, has many attributes that the practitioner can use.

Each attribute, like a star in a constellation, creates a mental projection or image of a god. By using attributes, be it runes, stones, plants, gestures, or prayers, the practitioner draws closer to Odin and allows this ancient power to manifest itself.

What are the attributes of Odin? First of all, the Allfather is the Supreme Warrior. All those things that are directly associated with battle and war are his attributes, for example, the sword and spear. He loves mash and honey, beer and fish, bread and garlic. Its color is black, grey, and deep blue.

But Odin is not a simple warrior. It is the one who is waging war with oneself as well. Odin is a warrior who wins battles by making a sacrifice (losing his eye) in exchange for higher wisdom. He is a supreme magician who owns runic magic. The attributes of his magical talent are the staff and such runes as Dagaz, Eyvaz, Gebo, Odal, Vunyo, and Ansuz.

Odin has always been famous for his eloquence. He can express his thoughts clearly, sometimes in verse or poetry. Like air, his thoughts can penetrate anywhere. For this reason, his element is air. His numbers are 3 and 9. His totem animals are wolf, raven, snake, eagle, and horse. Odin is a warrior, a mage, and a poet. All or most of these attributes must be used during the offering ritual to Odin. 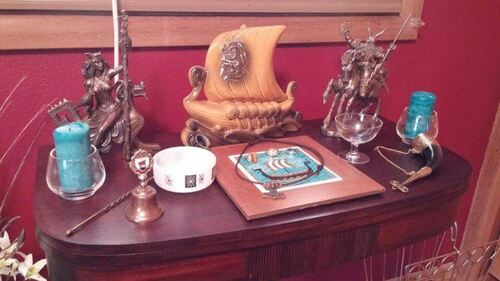 Before proceeding with the ritual, the magician must create a magical space or altar. It can be inside the house or outside, for example, in a forest or garden. This is where the practitioner meditates, performs rituals, and communicates with gods or goddesses.

The altar must be made by yourself, as it displays the unique connection between personal beliefs and gods, external attributes, and the magical forces that start manifesting in the mind of the magician. You need to understand that the altar cannot be wrong. Whatever it is, this is your place of power. It can be created in a few hours or perfected throughout one’s lifetime.

You can place an altar in any room. The main rule is that you should be comfortable with it. It can be a small table or a place on the floor. Think in advance about where you will store those things that you will use as attributes during the ritual. It can be a shelf or a drawer.

Unlike an indoor altar, an altar in a garden, woods, or any other open space requires a flat area where you can place your ritual objects. For example, it could be a table, a stump, an altar stone, or just a flat rock.

Candles are sometimes used during the ritual, so it is wise to protect the surface of the altar from candle wax drippings, food, and sloshing of the drink. The cloth can also enhance your intent and magical resonance with Odin. You can use solid black, grey, or navy blue fabric or print. The color depends on the god you worship.

Exposure to fire is important during a ritual. Fire, as a source of ionization, changes the electromagnetic field of the practitioner and magical space, enhancing our ability to focus on inner experiences. You can use beeswax candles as they last longer and are usually free of harmful chemicals. The color of the candles should also match the attributes of the deity.

The offering dishes should not be large, but beautiful and meaningful. It can be salads, desserts, baked meat, or fish. You can use wooden or iron bowls, goblets, and cups.

–The Crystals for Odin–

One of the exotic attributes of Odin is crystals, such as amethyst and quartz. Due to their properties, they can create a feeling of calmness for meditation. It can also be ordinary stones or wooden talismans.

Communicating with the gods requires the practitioner to have good visualization and resonance with higher powers, so sometimes, but not necessarily, you can use the statue of Odin, the drinking horn, his runes, chalice, poems, and crystals. You can use animal figurines as a totemic sculpture of a particular deity, such as a wolf or a raven.

A drinking horn, a mug, a cup, or a chalice can serve in libation, which is an offering of a drink that the practitioner is pouring on the ground. In such a manner, one makes an offering to a deity as a sign of readiness to communicate.

The same ritual we can find in those stories where slain warriors arrive at Valhalla and drink from it to honor Odin. Runes are of great use too. Originally called futhark, runes represent the mix of different Germanic languages. They are often made of wood, paper, or crystals.

It is important to note that any preparations, drinks, or other ancillary items can cost as much as you like. Offering to Odin is in what you can give when you can.

Each person perceives the world through an individual and very different point of perception. Each practitioner will most likely have one’s idea of how to pray, think about this or that god, what is important and what is secondary. However, each rite will have several stages.

Finally, for any help, the magician must thank Odin and thus complete the ritual.

Signs of Odin Reaching Out

Belief in Odin, offerings in his honor, and other rituals are a journey into the depths of one’s own subconscious. The map of the journey is always different, but its direction is always the same.

Attributes of Odin, myths, images, ritual motions, words, and mental gestures fill the ritual of offering and cause an amazing experience that can be metaphorically called communication with Odin. It is as if a person activates that layer of the subconscious that stimulates us to be and develop strength, stamina, wisdom, clarity of thinking, and other divine virtues.

The archetype, which represents the all-knowing and all-powerful Odin, reveals our own divine qualities and inspires us to create. In daily life, the practitioner may begin to notice rapid changes in nature as a harbinger of Odin’s will. You may see his symbols more often than other things or hear about him. These moments of insight happen like flashes. This means that you have been heard.

It is worth understanding that communication with Odin consists of a series of events that should not be isolated. Every particular event in the practitioner’s life that he experiences as the touch of a god is primarily symbolic. However, its subjective importance for the magician is extremely high. Communication with Odin opens up new horizons and lets one feel oneself a small but a very necessary piece in a grand game of the gods.

link to Anubis, the God of Death: Rituals, Prayers, Offerings...

Anubis (also found as Inpew, Yinepu, or Anpu) is the name of the god who guides the spirits of the dead to the afterlife.He is nicknamed the "God of the Holy Land" and of Khentamentiu (a god...

Hathor is the goddess of love, femininity, and nature in the Egyptian pantheon of gods. The cult of Hathor dates back over 4,000 years ago and was known throughout Mesopotamia, as evidenced by the...