In every traditional culture there are myths and legends about dragons. The Chinese celebrate the Year of the Dragon even today, Christians have their own allegorical story of St. George conquering the dragon, while the occultists use draconic magic to get in touch with dragons from spiritual realms.

Since visual depictions and stories of dragons are all very much alike in cultures that were distant from one another, it begs a question: Where did dragons come from exactly? These are the 4 most probable explanations not only for dragons as such, but also for the origins of their different aspects (physical appearance, fire breathing, behavior):

In his excellent book An Instinct for Dragons, anthropologist David E. Jones argues that dragons are in fact mythologized depictions of lethal predators humans have faced throughout history. Especially large snakes like pythons, birds of prey and large lizards like crocodiles and goannas.

Goannas most certainly inspired Aborigines in their own belief in dragons. These large lizards can grow up to 8.2 ft in length, they have sharp claws and teeth and produce lethal venom. The only thing that’s missing are the wings.

But mythologized predators like dragons are often the archetypal representation of the most feared aspects of multiple predatory animals. So it’s not unusual that a dragon can have the torso of a lizard and the wings of a bird of prey.

This is also the angle taken by some Jungian and evolutionary psychologists, most notably Jordan B. Peterson:

Since dragons are the archetypal villain, and the slayer of dragons is the archetypal hero, the connection between reality and mythology is rather clear.

A villager who kills a python has essentially saved others from dying. And in historic conditions when people weren’t as protected from animal predators as we are today, this would certainly be good reason to make a superhero story out of a real-life event.

The dragon also hordes gold, or keeps the princess captive. In other words, a dragon can be a symbol of both doom and of luck. It can represent our own greatest fears. If we conquer our fears (the dragon, the horrible predator), we can achieve our goals and live happily ever after. 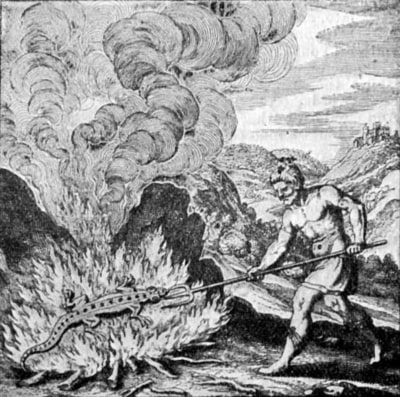 However, there is one thing missing in these popular theories on dragon origins – the fire breath. Why do dragons breath fire? Is fire supposed to represent venom?

But why don’t dragons simply carry venom if that’s the case, or have the ancients taken some artistic liberty on that front? This is where knowledge of the occult provides a groundbreaking explanation:

Nowadays the name salamander is used for a small lizard. But in the past salamanders were the mythological fire lizards which lived in volcanoes and manifested themselves in fire. Almost every culture had their own spiritual fire lizard.

In the Middle Ages, the renowned occultist and doctor Paracelsus wrote a wonderful treaty on otherworldly spirits that live in different elements. Among fairies, gnomes, dwarfs and mermaids he also writes extensively about salamanders.

All of these creatures were acknowledged as completely real but living in different planes of reality of their respective element. Gnomes live in earth, and earth is for them the same as air is for us. Salamanders live in fire, and fire is their air.

One can even perform certain rituals in order to see these creatures. However, Paracelsus warns that salamanders are extremely dangerous and shouldn’t be summoned lightly.

The fear of these fiery lizards that live in volcanoes on high mountains could well be the origins story of dragons in general. Or at the very least the fire breathing aspect of their folkloric depiction.

3. Bones and fossils of large animals and dinosaurs 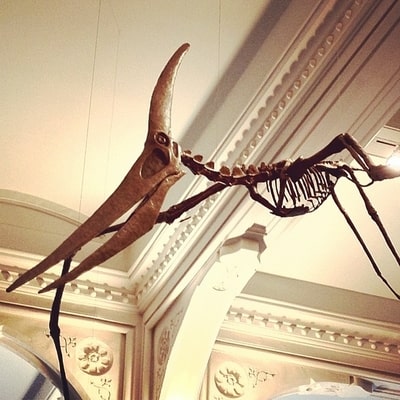 Bones of larger animals such as whales and crocodiles that wandered off into places where they were unknown could have prompted some cultures into believing these animals were dragons. After all, a dragon is physically speaking not all too different from a crocodile upgraded with a pair of wings.

Likewise, dinosaur fossils could play the same part, sparking the imagination of the common folk even further. Imagine what an Aborigine or a Christian monk from the 10th century for that matter would think if he encountered fossil remains of the flying dinosaur pterodactyl.

Without the scientific methods of inspecting such remains, it would be really easy to construct a story of a dragon instead of a basic biological creature from either one of these examples.

The Nile croc is a vile and ferocious beast that resembles a dragon. An Egyptian would most certainly not treat it as a dragon, but it’s well known that these crocodiles can wander off into different neighboring waters.

If a member of a foreign culture encountered a crocodile that can seemingly levitate (!) you can only imagine their astonishment. This could well be the case, as the Nile crocodile can move with his trunk elevated off the ground, which is commonly referred to as “high walk”.

Final Word: Where Did Dragons Come From?

There are large predatory animals on every continent. Humans have had to struggle against them and probably mythologized them in the same way as we mythologize certain dangers in comic books and movies by turning them into iconic villains.

Joker is the crazy, nihilistic sadist, Doctor Evil just wants to watch the world burn from his space station. A dragon is the archetypal villain of primitive cultures that had to defend against large snakes, lizards, birds, cats. Being the archetypal depiction of danger, they acquired deeper significance in more advanced cultures.

Then there is the fact that shouldn’t go unnoticed, pertaining to the way traditional people viewed reality. They believed in spiritual realities to a point of utmost certainty. Salamanders and gnomes were just as real to them as ordinary creatures even though only the well-trained eye could actually see them.

So the origins of dragons are multifaceted. From ordinary animals to spiritual beings, there are many layers of inspiration that went into constructing the magnificent winged beasts we know today.