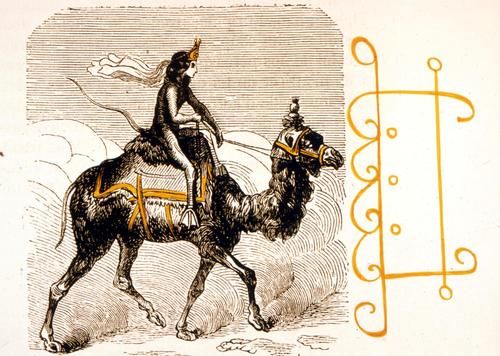 Paimon is a King of Hell presiding over 200 legions of demons. Paimon is very obedient unto Lucifer and he can grant many wishes to a magician that summons him.

Practising occultist Carroll “Poke” Runyon has suggested that the origin of King Paimon can be traced to Mesopotamia, equating this demon with Isis, a Middle Eastern goddess. Runyon’s connection is based on Paimon’s appearance (feminine features and riding a camel) and because “Paimon” meant a “tinkling sound” in an unspecified language, a reference to this deity. 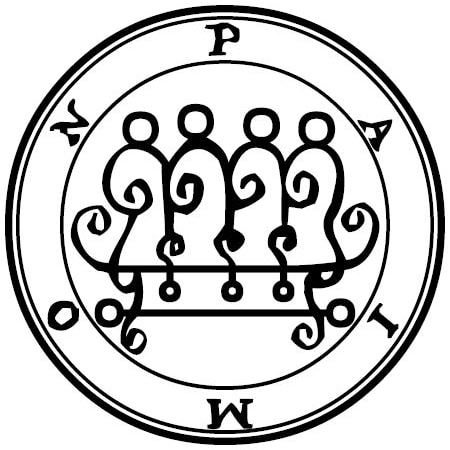 Paimon in The Lesser Key of Solomon

Paimon is the ninth spirit described in Goetia or The Lesser Key of Solomon:

The Ninth Spirit in this Order is Paimon, a Great King, and very obedient unto LUCIFER. He appeareth in the form of a Man sitting upon a Dromedary with a Crown most glorious upon his head. There goeth before him also an Host of Spirits, like Men with Trumpets and well sounding Cymbals, and all other sorts of Musical Instruments. He hath a great Voice, and roareth at his first coming, and his speech is such that the Magician cannot well understand unless he can compel him. This Spirit can teach all Arts and Sciences, and other secret things. He can discover unto thee what the Earth is, and what holdeth it up in the Waters; and what Mind is, and where it is; or any other thing thou mayest desire to know. He giveth Dignity, and confirmeth the same. He bindeth or maketh any man subject unto the Magician if he so desire it. He giveth good Familiars, and such as can teach all Arts. He is to be observed towards the West. He is of the Order of Dominations.13 He hath under him 200 Legions of Spirits, and part of them are of the Order of Angels, and the other part of Potentates. Now if thou callest this Spirit Paimon alone, thou must make him some offering; and there will attend him two Kings called LABAL and ABALI , and also other Spirits who be of the Order of Potentates in his Host, and 25 Legions. And those Spirits which be subject unto them are not always with them
unless the Magician do compel them. His Character is this which must be worn as a Lamen before thee, etc

Paimon doesn’t appear in the Bible.

Paimon in the Sacred Magic of Abramelin the Mage

Paimon: Is also frequently written “Paymon’, and sometimes “Paimonia’. Probably from Hebrew, POMN, = a tinkling sound or small bell. This is again derived from the Hebrew root POM, = to agitate, impel, or strike forward. The word POMN is employed in Exodus 28, 34; 28, 33; and 39, 25. Paimon is also called by the Rabbins by the title of OZAZL, Azazel, which is a name used in Leviticus with reference to the Scape-Goat. Its derivation is from OZ, = a Goat; and AZL, = to go away. It has frequently been warmly discussed whether the word in question means simply the Scape-Goat, or whether it signifies a Demon to whom that animal was dedicated. But in Rabbinic Demonology it is always used to mean one of the Chief Demons.

Paimon in the Pseudomonarchia Daemonum

Paimon is more obedient in Lucifer than other kings are. Lucifer is heere to be understood he that was drowned in the depth of his knowledge: he would needs be like God, and for his arrogancie was throwne out into destruction, of whome it is said; Everie pretious stone is thy covering (Ezech. 88.).

Paimon is constrained by divine vertue to stand before the exorcist; where he putteth on the likenesse of a man: he sitteth on a beast called a dromedarie, which is a swift runner, and weareth a glorious crowne, and hath an effeminate countenance. There goeth before him an host of men with trumpets and well sounding cymbals, and all musicall instruments.

At the first he appeereth with a great crie and roring, as in Circulo Salomonis, and in the art is declared. And if this Paimon speake sometime that the conjuror understand him not, let him not therefore be dismaied. But when he hath delivered him the first obligation to observe his desire, he must bid him also answer him distinctlie and plainelie to the questions he shall aske you, of all philosophie, wisedome, and science, and of all other secret things.

And if you will knowe the disposition of the world, and what the earth is, or what holdeth it up in the water, or any other thing, or what is Abyssus, or where the wind is, or from whence it commeth, he will teach you aboundantlie. Consecrations also as well of sacrifices as otherwise may be reckoned. He giveth dignities and confirmations; he bindeth them that resist him in his owne chaines, and subjecteth them to the conjuror; he prepareth good familiars, and hath the understanding of all arts.

Note, that at the calling up of him, the exorcist must looke towards the northwest, bicause there is his house. When he is called up, let the exorcist receive him constantlie without feare, let him aske what questions or demands he list, and no doubt he shall obteine the same of him. And the exorcist must beware he forget not the creator, for those things, which have beene rehearsed before of Paimon, some saie he is of the order of dominations; others saie, of the order of cherubim. There follow him two hundred legions, partlie of the order of angels, and partlie of potestates.

Note that if Paimon be cited alone by an offering or sacrifice, two kings followe him; to wit, Beball & Abalam, & other potentates: in his host are twentie five legions, bicause the spirits subject to them are not alwaies with them, except they be compelled to appeere by divine vertue.

Paimon made a great entrance into mainstream culture with Hereditary, a popular 2018 horror movie. The plot is centered around a family haunted by a Paimon worshipping sect that has a mightily worriesome agenda. I shall say no more.

How to Summon King Paimon

According to famous grimoires, Paimon can be conjured by performing a magic summoning ritual. Reasons for summoning Paimon are usually:

Here is a full guide for summoning Paimon.

In the Goetia it is written:

“..if thou callest this Spirit Paimon alone, thou must make him some offering”

Demonolators and some magicians present offerings to King Paimon to appease and befriend him. Others claim that no offering is necessary. Some common offerings include money, jewelry, precious metals, candles and incense.