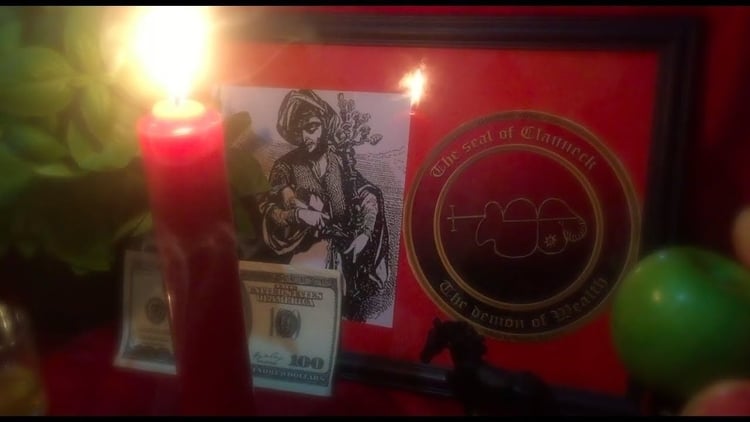 Money struggles fall into the most common reasons for dabbling in magic. Many practitioners will begin with simple money spells before moving to more dangerous rituals involving demons and angels.

Summoning demons is my specialty, and in my experience they are the most helpful when it comes to making significant financial changes. It’s because demons are focused more on earthly matters than on the spiritual ascension side of things. They are for the most part practical creatures who help with practical issues.

But not just any demon will do! You need to find the right one for the task. So I’ve created this list featuring the 10 most powerful money demons you can summon (or hire me to summon for you).

Without a doubt, Mammon is the go-to demon for wealth and prosperity. He was worshipped by Phoenicians, the super-wealthy traders of the ancient world. Through the influence of Judaism and Christianity, this respectable deity became a demon of  avarice and people no longer worshipped him. Well, at least not out in the open.

In medieval and modern grimoires we learn that he is “a President of Hell” and “Hell’s Ambassador to England”. It’s interesting to note that England is (or at least was) another wealthy and trade-oriented nation, like the Phoenicians. The link between the two is not arbitrary. It seems that those who are on good terms with Mammon reap the benefits of good fortune and coin falls into their lap!

Mammon is a demon that can be summoned both if you need some money fast AND if you need help with making significant wealth over a longer period of time, i.e. starting a business venture.

Clauneck appears in many older grimoires, most notably the Grimorium Verum, The Secrets of Solomon and Dictionnaire Infernal. He is known for procuring money to his summoners fast and efficiently.

While Mammon is generally summoned by those who already have a financial plan, Clauneck is summoned for that quick injection of cash that seems to come out of nowhere. Clauneck is a gambler’s favorite, the demon you turn to in emergency situations, if you lose all your belongings in a foreign country and need to find money for a ticket back home.

But Clauneck can also be a dangerous companion, because he will test the summoner’s intentions. It’s important to be honest and to show one’s true ambitions when communicating with Clauneck. He will not deal with people who don’t have great ambitions, because he wants offerings in return once he’s done their bidding.

The demon Barbatos appears in the famed Ars Goetia (as do many of the other demons on this list). He has many useful attributes when it comes to harnessing wealth. Those include finding hidden treasures, divination (foretelling future events), resolving issues with friends and foes.

As always, magical texts use a lot of symbolic language. Hidden treasures can turn out to be excellent business ideas, not literal treasure chests scattered around the neighborhood.

Divination doesn’t have to be precise foretelling of the future, but can include a greater insight into possible outcomes of specific actions. For a business owner such insight can make the difference between large profits and financial doom.

Lastly, if you’re on good terms with everyone, you are more likely to be invited to a job interview, get that business partnership and sign the deal you were hoping for all along. So it’s no wonder that many magicians turn to Barbatos when they are planning their next financial conquest!

Bael is the first of the 72 demons listed in the Ars Goetia. In his description it is stated that he can make the magician invisible. Again, we would be foolish to believe that this is a Harry Potter type of invisibility trick, whereby the magician becomes physically undetectable to his enemies. What Bael offers is in fact of much greater use (though not as theatrical).

Bael will simply make the enemies of the magician lose focus of him and his actions. Let’s say you weren’t paying taxes (though you probably should!). By summoning Bael you are likely to ward of the tax man for some time. If you were fighting for a job promotion, your prickly competitor will not lay traps for you because they will not perceive you as a competitor, until you’ve snatched the prize right in front of their nose!

Of course, thieves and hackers would also make great use of Bael’s power for their own immoral interests, though I would never support such ambitions with my own rituals. In any case, those are just some of the reports by those who’ve managed to summon this curious demon into their lives.

King Paimon is said to provide knowledge of the “Waters” and great skill in arts and crafts. Waters are symbolically the sphere of emotions and psychic abilities. These are two areas where artists in particular excel.

Indeed, Paimon is seen as a patron demon of artists, helping many who’ve once struggled with money make a living with their art and in some cases reach unprecedented levels of fame and fortune.

Paimon has helped me write my books and content on multiple websites with greater ferocity and wit. After I summoned Paimon my writing flourished, as a I gained deeper levels of inspiration as well as insight into my readers deepest desires.

Paimon also “giveth Dignity”, meaning good social standing and ascension to higher ranks. So it can be said that Paimon can help two opposite types of people, the artist and the bureaucrat, in their mutual pursuit of gold.

Belial is the demonic embodiment of fire and (intelligent) aggression. He can be seen as the archetypal shadow of Mars, the God of War. Whereas a typical god of war would be summoned by an army commander, Belial is like all demons more accustomed to helping individuals in their own personal struggles.

When it comes to making money, getting in the trenches and doing the dirty work is essential. A tinge of fury and madness is often required to push through mundane and extraordinary obstacles and Belial stops at nothing until he gets the sought for prize.

If you are plagued by the modern ills of timidity and laziness and your finances are worse off for it, consider summoning Belial to break their spell and raise your willpower.

Knowledge equals power, and money is definitely part of the equation. There is (in many cases) a direct correlation between the amount of knowledge that a person possesses and their net worth. This is why you see the super-wealthy like Bill Gates and Jeff Bezos reading a lot even though they are at the pinnacle of success.

Furcas is an incredible demon companion if you need to learn any subject, financial or otherwise. He is the demon to summon if you want to gain motivation to read many books or become interested in a given topic.

So make the topic of your interest one that is destined to make you wealthy, summon Furcas to aid you in learning and you will get to the finish line faster than you had previously dared to imagine.

Andromalius is the last, but not the least powerful of the demons described in Ars Goetia. He is a demon that can help you discover theft and stolen goods. If you were a victim of theft (physical, digital or otherwise), Andromalius can investigate this occurrence, find and ultimately punish the perpetrator as well as retrieve your possessions.

If you haven’t been a victim of theft (yet), it’s still wise to consult Andromalius and prevent it from happening. This is especially true if you’re an owner of a business and you are suspecting that some underlings or a business partner are taking chunks of your earnings behind your back.

In the Lesser Key of Solomon Bune is described as a true wealth bringer: “He giveth riches unto a Man, and maketh him Wise and Eloquent.” Bune is also known for providing good social reputation which has seen more than a few summoners ascend the social ladder quickly in quest for promotions. Summon Bune only if you are mightily ambitious and aren’t afraid of climbing to high places.

Marbas is the patron demon of engineers and all other artisans engaged in mechanical arts. Our modern, capitalist environment rewards inventors that are able to satisfy human needs with great bounty.

So it is no wonder that thousands of programmers, engineers and tech wizards in general are swimming in cash. If engineers and businessmen like Elon Musk and Mate Rimac are the people you wish to emulate, Marbas would be the most suitable demon to summon.

I’ve shared many demon summoning rituals on this website. Some people who’ve attempted these rituals had great success, while others struggled to get any genuine response from their spirit of choice.

If you are struggling with summoning a spiritual entity or you simply want the results to arrive more quickly, you can hire me to perform a ritual for you.

Now is your time to take your future into your own hands, fulfill your dreams make more money than ever before. See you on the other side!

14 thoughts on “10 Powerful Demons You Can Summon for Money”