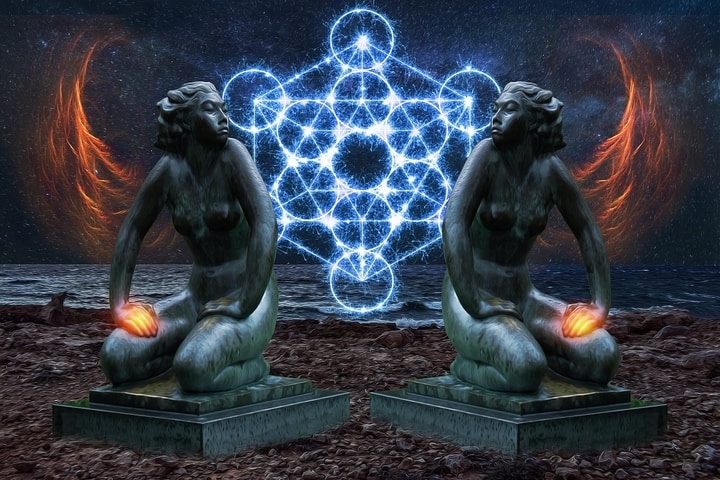 Spirituality is often considered as a way of connecting with God, Universe or the Absolute. All traditional cultures are predicated on a belief in a Higher Power and it is up to the individual to reconnect with this power or at the very least follow the morals of their given religion (which is predicated on the existence of this power). So it may come as a bit of a surprise that there are two entirely different spiritual paths on this journey, that of the right hand and left hand. This is especially true when it comes to esoteric and magical beliefs and practices.

The Symbolism of Right and Left

On the political spectrum, the Right is mostly concerned with preserving social values against the onslaught of change. The political Left however is bent on change and progress. Already we find some major characteristics of the right as being conservative and orderly, whereas the left is geared towards change and chaos.

Drawing this analogy further, we arrive at deeper, esoteric implications. I will quote a passage from the excellent book Qabalah, Qlippoth and Goetic Magic by Thomas Karlsson to illustrate this difference:

The western Left Hand Path and the eastern Indian Left Hand Path, the Vamachara, strive towards the same goal. The common yoga of the RHP strives – just like the light western mysticism – to reach the unity and melt together with God or the divine. The RHP in Tantra also has this goal. Julius Evola in The Yoga of Power explains the difference between the RHP and the LHP:
There is a significant difference between the two Tantric paths, that of the right hand and that of the left hand (which both are under Shiva’s aegis). In the former, the adept always experiences ‘someone above him’, even at the highest level of realization. In the latter, ‘he becomes the ultimate Sovereign’ (chakravartin = worldruler).
The LHP takes a further decisive step than the RHP. It represents the mysticism around the number 11 and the AA formula. The RHP leads to unity with God, while the Left takes one step beyond God. The RHP leads to a conclusive and final, eternal goal, while the goal of the LHP is to arrive at a new beginning. The two roads have been compared to the two ways that one can follow a river. The RHP follows the river into the sea, while the LHP goes against the flow back to the spring. The LHP goes backwards and against the stream. When the magician reaches the spring he has the possibility to alter the direction of the river and create a new river if he wishes to.

So we find that the Right Hand Path is governed by light or white magic, and it’s the path that is recommended to most aspirants on the spiritual journey. But there is also a dark path that can be followed. Both paths promise greatness to the initiate, but they have ultimately different end goals. The RHP leads to the destruction of the Self in order to return to the Primordial Absolute from which all Creation came into Being. On the other hand, the LHP leads further away from the Absolute, glorifying the individual and making him more powerful, to the point where the practitioner of the left hand path becomes a differentiated God in full control of his own reality.

But, what reason exists for turning towards the dark side, according to the Qabalah? When analyzing the Qabalah’s view on metaphysical evil, we find that it is not necessarily connected wit the mundane brutality that we normally associate with evil. The Qabalistic, metaphysical evil is, at the same time, both a destructive force and a force of creation to which man must turn if he wants an individual existence. Man is separated from God in the Creation and from his mother at birth. Most religions offer to sphepherd man back to a utopian, original state. The dark path instead guides man into a second birth in which knowledge is attained, and he becomes like a god, just as the Serpent in the Garden of Eden promised. According to the Qabalistic view on evil, power and knowledge are the keywords that illustrate what the dark side has to offer.

RHP and LHP can be found in almost every complex esoteric system simply because light cannot exist without darkness and vice-versa. In order for there to exist a path of unselfishness, there has to also exist its opposite. In Kabalistic and Judeo-Christian mythological corpus exist the Tree of Life and the Tree of Knowledge. Because man has eaten the fruit from the forbidden Tree of Knowledge in his desire to become as powerful as God, he has already embarked on the left hand path.

All traditional religions strive towards reuniting with God by banishing this desire. That is the path of the right hand. But as an undercurrent there exists the path of the left hand, which embraces the Serpents quest for knowledge instead of returning to that primordial innocence that is symbolized by the Garden of Eden.

In Kabalah, on the RHP the initiate embarks on the journey symbolized by the Tree of Life, which is constituted by ten divine emanations known as Sephiroths. Each of the Sephirots is governed by angelic forces that provide challenges that have to be overcome in order to finally unite with the Godhead. But the shadow side of this process is symbolized by the Tree of Knowledge, which is made of the opposite of Sephiroth also known as Qliphoth. Qlipha are governed by demons such as Lilith, Asmodeus, Abaddon and many others.

There are many pitfalls on both journeys, but the left hand path is considered far more dangerous. However, the reward of becoming a fully individuated God is considered by some to be greater than merely returning to the Primordial Source from which all existence has arisen.

A similar difference that can be characterized as RHP vs LHP can be found in other cultures. Taoism is considered by some as a left-hand path, while Confucianism is the right-hand path. Simply because Taoism is concerned more with individual’s spiritual progression, while Confucianism is concerned more with preserving social equilibrium even if it goes against individual’s desires and progress. Again, we find a battle between individualism and collectivism, between selfishness and unselfishness.

In esoteric Hinduism the left hand path is that of Shakti Tantra, or Yoga of Power, as mentioned already in the passage quoting Julius Evola. The difference between the two paths is made especially clear in mainstream Christianity, which has relegated the left hand path to an outright heresy, depicting it as Satanism or Luciferianism and for a large part of its history outright persecuting anyone who dared to embark on this dark journey.

When it comes to magical operations, right hand path is mostly concerned with white and angelic magic. The left hand path includes demonic magic and curses aimed at harming people.

However, some magicians and theologians divide white and black magic based on their desired outcome rather than the type of magic being used. For example, demonic magic can be considered white magic if it’s used for benevolent purposes such as healing a sick person. Having said that, I’ve yet to find any angelic magic that would be aimed at harming others so it seems that all angelic magic is white, whereas demonic magic can be one or the other.

For this reason, famous Renaissance occultists like Marsilio Ficino and Pico della Mirandola were very reluctant to include demonic magic into their magical systems. Magicians who did, such as Heinrich Cornelius Agrippa were considered to be heretics and black magicians by the Church authorities during the times of the Reformation and witch hunts. These historical influences have seeped into the modern and contemporary imagination which almost exclusively designates a special place in hell for anyone meddling with demons.

The easiest way to make out the difference between right hand and left hand is to watch Star Wars. George Lucas did an excellent job of embodying these two principles in the Jedi and the Sith. The Jedi obviously represent the Light Side of the Force (RHP) while the Sith represent the Dark Side of the Force (LHP). The former are ruled by unselfish motivations while the latter are striving for power and knowledge at all costs. We can find some similarity between the Left Hand Path, the Sith and Nietzsche’s philosophy based on Will to Power and becoming the Overman (Ubermensch). Watch Darth Sidious’ attempt to seduce Anakin into the dark side:

Some left hand practitioners will probably be somewhat insulted by being compared to Darth Vader and Emperor Palpatine. While I’m not suggesting that they would commit atrocities to become living gods, the ability to make moral and personal sacrifices is an integral part of the left hand path and therefore the comparison is justified, at least theoretically.

While the right hand path is the path of light and eternal bliss, the left hand path is the path of darkness, knowledge and power. The yin and yang of Taoism and the Tree of Life and the Tree of Knowledge/Death in Kabalah are both depicting two sides of the same coin. Any esoteric system that has a light side is bound to have another because all Absolutes are internally divided by polar opposites and the seekers who align with one or the other.