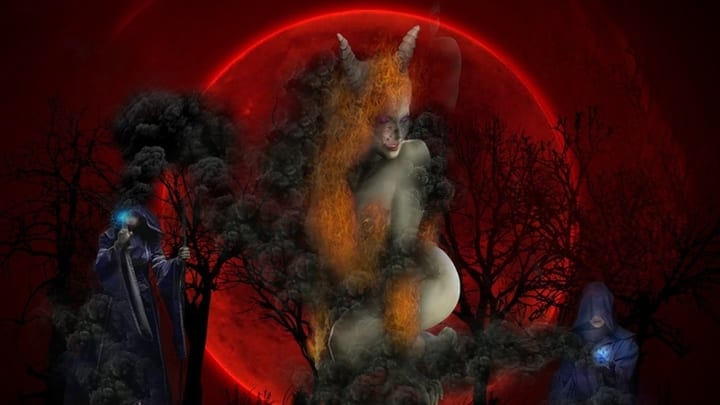 Here is a small excerpt from my upcoming book, “Goetia Rising”:

Sexual rites and rituals have in most cultures gained an underground and esoteric status. Sex, being an underground and taboo topic, is charged with demonic energy that can be seldom found in other activities. It is therefore pertinent for magicians and witches to gain some knowledge of this incredibly vast magical practice. Coitus itself is enough to lead a person to spiritual enlightenment. Its ecstasy can create an opening between the outer and inner world, leading to the experience of Oneness. It is at the core of certain Islamic mystic practices, Tantra, and of course, many Satanic rituals.

We are mentioning all of these examples just to show that sexuality is part and parcel of spirituality, whether it is RHP, LHP, monotheistic, polytheistic or falling within any other category. Everything that we do revolves around sex, partially due to the simple biological pressure to reproduce, and more importantly because we seek transcendence, transcendence of duality, which happens when the masculine and the feminine principle are united. There is no surer way to transcend duality than by bringing two beings that possess the opposite qualities into a deeply engaged sexual experience.

Here we should make a small digression and state that no man or woman is completely representative of either the masculine or the feminine principle. No man is Absolute Man and no woman is Absolute Woman. Each of us contains a certain amount of both. Some men are manlier than others, as are some women. So it is possible that a biological female contains more of the masculine principle than a biological male, though this isn’t all too common. But it does explain homosexuality as a situation where the dominant principle is not in line with the biological vessel.

The goal of sexual magick is to bring the two opposing principles together and create an elevated spiritual state. This transcendent state apart from the self-sufficient bliss, can be used for practical purposes, such as summoning spirits, initiatory ritualism and creating various magical effects in our shared reality. If a conjuration is desired, the sexual act and the orgasm should be perceived as an offering to the spirit, and the seed as its animating force.

The sperm contains incredible life energy, enough to create a new animate biological vessel. I use these words “animate” and “biological vessel” to symbolize the inherent duality of the human state, as we are not solely our biology, but also the anima, the soul. The soul is the intermediary between the purely physical reality of biology and the purely spiritual reality of the Spirit. Animals are biological automatons whose actions are preconfigured by the Spirit.

Men are not purely Spirit-biology entities. The anima/soul provides us with free will, to varying degrees between individuals. For those who would deny free will and the soul, we can ask like Socrates, where does the tension between our Will and our bodies come from? If my body desires to be lazy, why can I recognize that this is bad and overcome it, or allow the body to win and feel guilty afterwards? Animals don’t possess any of the dilemmas and antagonisms of the Will/anima/soul and the body that we experience almost every waking moment. This proof for the existence of the soul was necessary to show that a man’s sperm has magical powers. A bull’s sperm, though containing virility and strength, cannot produce a soul.

Only a man’s sperm (as far as we know) contains this magical power. But humans are not the only creatures that have a soul or that are a soul. In the intermediary spheres from the Spirit to the Physical, there are many degrees of more and less subtle states that are filled with soul-creatures. Angels, demons and other lesser soul-creatures inhabit this translucent terrain. A man’s sperm can generate not only a physical being, but also a soul-creature. The distinction between Heavenly Father and Mother Earth or Gaia now becomes apparent. If a man’s seed falls into a woman, she will birth a physical soul-creature, because she is the representative of Gaia, the material world. If the seed is used not to impregnate a woman but to generate from itself a new life-form, that life-form will be a soul-creature, for it will lack the physical attributes provided by the female principle.

There are even more creative ways of using this energy that require a woman’s participation to a highest degree. It is my contention that some ancient sex rites featured in goddess cults were done for the purpose of consciously generating demigods. The woman that embodies the attributes of a goddess such as Hera or Aphrodite has sex with her mortal follower. Impregnating a goddess or being impregnated by god produces a wunderkind.

Almost all of the ancient heroes were demigods. Aeneas was the son of Aphrodite, goddess of love and Prince Anchises. He fled to Italy and became the ancestor of Romulus and Remus, founders of Rome. Achilles was son of the sea nymph Thetis, and Peleus, king of the Myrmidons. Mythological characters or not, they embody the successful transfer of godly powers into mortal flesh. We can only guess how many great men and women can thank their impressive willpower, intellect, beauty and vitality to sex rites performed by their parents.

The current lack of such human greatness as witnessed by the ancient world can be connected with the loss of authentic knowledge of sex rites that was at that time transmitted through underground esoteric cults. Using the authentic techniques that remain are small groups of devoted Satanists practicing sex rites to create a Satan’s child, the Antichrist. “Little children, it is the last time. And as ye have heard that Antichrist shall come, even now are there many antichrists, whereby we know that this is the last time.” (KJ21). Indeed, there are degrees of transference of divine powers.

Not every child conceived through a sex rite will become a fabled legend. For one Antichrist, there are many antichrists, imbued with less power and resemblance to their spiritual Father or Mother. Still, if a practitioner of magick is ready to have a child, it would be a wasted opportunity to not include a sex rite. Nowadays, scientists are beginning to use gene editing to create “better babies”. Magicians have done much the same since time immemorial, using techniques developed through the use of higher intuition, which yet again confirms Crowley’s statement: “Science is always discovering odd scraps of magical wisdom and making a tremendous fuss about its cleverness.”

One thought on “Sexual Magic and Demigod Offspring”