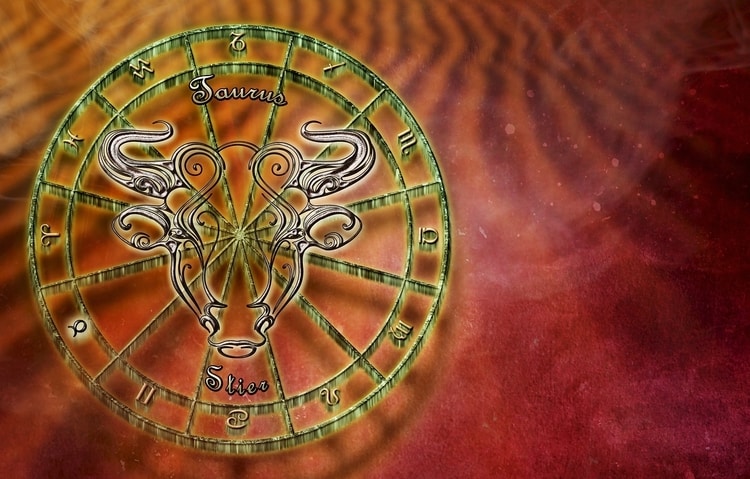 The sign of Taurus, the first earth sign in the zodiac series, evokes the middle of spring, green meadows and fatty pastures. Governed by Venus, a sensual and carnal planet, Taurus is in analogy with House II, concerning acquisitions, possessions and everything that one ingests, that one assimilates.

Let’s see the typical portrait of the natives of Taurus, the analogies of this sign, the psychology of its planet and a description of what the sign can produce the worst in terms of humanity. We will end with some examples of personalities strongly marked by bullfighting values.

The first thing I would like to say is that I don’t want to be confused with Aries because I also have horns. Forget the image of bullfights where I am returned … Goat! Forget the image of cartoons where the furious Taurus rushes on all that is red! Forget all that and rather imagine a placid cow grazing because I kindly remind you (but firmly anyway) that my sign is governed by Venus and the Moon.

What matters above all to me is to feel calm. And for that, I need to feel completely safe first. This implies a certain number of imperatives: having a warm and cozy place to rest (I am a real slacker when I stop being a workaholic!), Having money and some savings (c is safer), have a solid culture and be surrounded by people I love. How? ‘Or’ What ? What do you say ? Is that the portrait of happiness for anyone? Well yes, I am a simple person. Finally, at home, it is really absolutely necessary for my happiness because I am easily anxious.

Okay, let’s calmly resume (Taurus likes to resume, review, rehash: it is its ruminating side!), I seek security and stability and, for this purpose, I can be very persevering (some would say stubborn), patient and pugnacious. Obviously, when people look for me, they find me and “nothing beats an angry pacifist” because I accumulate annoyances and anger up to a point but once the manger is full, it overflows!

Do not think that I am looking for selfish security either because I think a lot about those I love. They are the engine of my life and it is always for them that I work. I want to provide safety and comfort to mine. Mine? Yes, I am quite possessive in my human relationships … I tend to “appropriate” others when I love them. It’s in my nature.

I am an Oral: I need to swallow and digest things and people (at the symbolic level of course, the Taurus, as a good vegetarian, has nothing of the cannibal!). However my sensuality is based on this same principle of orality, I need to “taste” the other and to have it physically unlike my friend Gemini for example who prefers, at first, the conquests of the mind …

I am a “physical” for whom contact counts as much as the words said and that does not mean that I am not sentimental. It is only that my feelings find their natural expressions in the gesture and the caress, the pleasure and the flesh. This natural sensuality also makes me love nature, the contact with the fresh air and the sun, the roughness of the wood and the scents of the forest. I also like beautiful things, works of art, beautiful music and sensual sculptures…

In short, I am greedy of sensations, always ready to enjoy by my senses. This is obviously paid for. And often, I have a few extra pounds because eating is my sweet sin … Fortunately, Taurus is generally solid, rarely sick.

Well, I leave you, it’s time for four hours but before I give you a small example of Taurus well Taurus : Joe Cocker with Sun, Moon, Venus and Mercury in the second sign …

PRO TIP: Disover your TRUE sign based on the combination of East and West astrology with this simple astrology quiz.

In Egyptian mythology, we will think of Nut, Goddess of attraction and cohesion of the universe: she is the one who connects, who unites, who marries the different elements of the universe into a harmonious whole. Many other myths are interesting to study, such as that of the goddess Ishtar for example.

A word about Ariane, Theseus and the Minotaur: Ariane is the one who saves Theseus out of love, the one who delivers man from his animal impulses (figured by the Minotaur, a sort of cannibalism with unbridled libido, claiming virgins and locked in his own mental world, the Labyrinth). She is a transcended figure of Love.

The Greek-Latin myths linked to Venus are not the most representative because they seem to be closer to Venus Aphrodite, the Venus of Libra (see next paragraph), on the other hand, the myth of Persephone is quite edifying: removed by Pluto ( governing the sign opposite to Taurus , the Scorpion), Proserpine / Persephone is assimilated to the resources of the earth, to its riches since its abduction, through its mother Ceres / Demeter, leads to the decline of the harvests, to the impoverishment of harvest and soon to starvation. We find here perfectly the spring and nourishing function of Taurus .

Venus mastering both the sign of Taurus and that of Libra, it will always be useful, when determining a dominant Venusian, to find out on which side this dominant leans. We will retain the following color chart:

How to determine if Venus is Lucifer or Hesperus?

Venus Lucifer (Lucifer means “bearer of light”) is before the Sun in the zodiacal direction (for example in Aries while the Sun is in Taurus ). It characterizes a spontaneous, extroverted, enthusiastic and idealistic affectivity that we will bring closer to the Venus / Moon values of Taurus .

Venus Hesperus (Hesperos means “western” and therefore “evening”) is after the Sun in the zodiacal direction (for example 20 ° from Gemini while the Sun is 10 ° from the same sign). It characterizes a more controlled, more introverted, less exuberant but deeper and more reasonable affectivity. We will bring it closer to the Venus / Saturn values of Libra.

If the human being can improve, evolve, erase his faults and highlight his qualities, it also happens on the contrary that he gets caught up in his most negative impulses. This regression can for example be caused by alcoholism, by particularly difficult life circumstances or by the accumulation of neuroses.

The fact remains that the values ​​specific to its sign are then largely corrupted and that one can make a portrait “in vitriol”. Here is the description of Taurus in what it can develop most negative and despicable. This portrait applies of course to both a man and a woman.

The Negative Bull or Enraged Cow

Obstinate and even obtuse to the last degree, our Rabid Cow will not even bother to listen to others as she is convinced of the merits of her ideas. Common sense, logic or even good manners seem therefore useless arguments: the Rabid Cow is right, period.

Furthermore, the negative Taurus develops a distressing greed in all areas and seeks to accumulate, to have and to keep. This is true for food, for money and for the “loved” people towards whom he cultivates a sickly jealousy and a sclerosing possessiveness.

This eagerness to have, to keep and to collect can lead him to many faults (greed, trickery, meanness …) and the worst is without doubt that our Rabid Cow will invariably want to have the maximum by doing the minimum, hence a behavior shameless parasite and opportunist.

Willingly rude, vulgar, brutal in his words as in his gestures, he will be envious and will not hesitate to destroy the happiness of others if he has the opportunity.

Is it useful to specify that sexual debauchery fully participates in his sensual greed and that he will think that all means (betrayal, venality, lying …) are good for achieving his ends?

The whole of the intellectual faculties being turned towards sybaritism and cunning, as much to say that this subject will be neither wise nor capable of deep reflection since only the appearance and the materiality of things matter to him.

Also check out my other recommended magick courses. Talk to you soon!