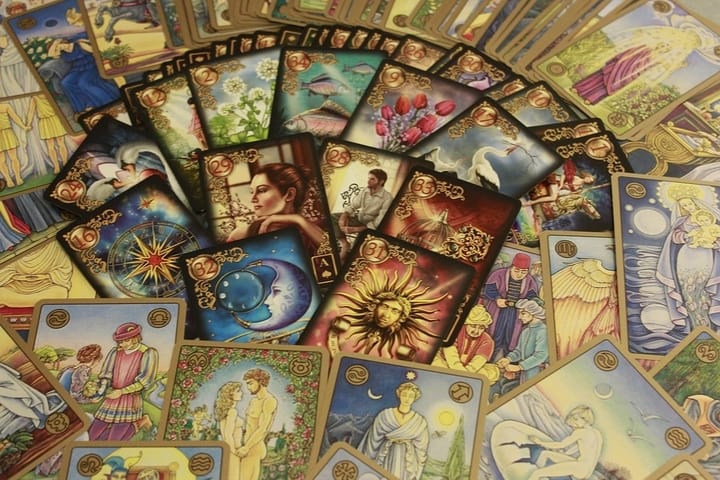 People are always looking for a way to predict their future using a variety of techniques and tools. For many centuries, cards have been and remain one of the most popular methods of fortune-telling.

The first mention of tarot divination dates back to 1540 when one of the earliest treatises on divination with playing cards by Marcolino da Forli was published. The homeland of tarot is Italy, where some of the very first tarokka decks were created.

However, today in esoteric stores you can find not only Tarot decks but also other divination cards, which are most often called oracles. Within the framework of this article, you will learn about how they differ from Tarot, how convenient it is to work with them, what are their advantages.

Tarot is the key to the subconscious through images

In any case, tarot is the key to the subconscious with the help of images. Today, techniques similar to fortune-telling are used in psychoanalysis and psychotherapy in different directions. The pattern recognition mechanism used by the human psyche for survival (responding to danger in a split second) is called pareidolia.

Thanks to this mechanism, we see things like castles or other familiar shapes in passing clouds. It is on this mechanism, on the ability of the brain to isolate familiar details from abstract images and build them up to concrete ones, that psychotherapeutic work with metaphorical maps is based.

How do metaphorical associative cards work? There are sets of different numbers of cards. The set “Myths”, for example, consists of 55, the set “Ekko” – of 99, the classic set “He” contains two sets of 88 cards, some of which contain the names of life situations, and the other – images of these situations. The recipient, describing the card, reveals the essence of his problem, projecting it onto what he saw and describing the image in his interpretation.

What are Oracle Cards?

Oracle is a deck consisting of an arbitrary number of cards and not rigidly bound to a specific structure. In some oracles there are 78 cards, which is why many confuse such decks with Tarot. In others there can be 36, 40, 58, and generally as many as the author wants.

There is no rigid framework here. If the Tarot is always a clear structure – 22 Major Arcana, 16 Court cards, and 40 numerical cards, then the oracles cannot be structured according to a certain principle – they simply do not have a common system for all. Most often, some sort of systematization within the oracle is still present (for example, dividing cards into certain groups), but it will always differ from the classic Tarot.

The same can be said about the meaning of the cards themselves. There are a huge number of Tarot decks, but we always know that the Two of Cups remains the Two of Cups. Even if, at the same time, it does not depict people, but a pair of elves, mermaids, vampires, or cooing doves in general, or just a symbolic image, i.e. the main essence of the map does not change, only special semantic shades and nuances are added.

The subjects of Oracle Cards

If the Tarot system is suitable for considering any situation, since it covers all the phenomena of our world, then this often cannot be said about oracles. Yes, of course, there are universal oracle decks. However, narrowly thematic ones are also often found, for example, focused on viewing love relationships, health or business issues, or united by one topic – the oracle of flowers, animals, stones, and so on. To work successfully with the latter, you need to be very familiar with the main topic.

After all, for example, a person who does not distinguish between linden and ash, and does not know what symbolism each tree is associated with, will not be able to fully interact with a deck of such a theme. If the oracle is focused on the zodiac or is tied to lunar days or the phases of the night star, it will be difficult for someone who has never delved into astrology to approach it.

Is it easier to work with Tarot or Oracle cards?

Is it easier or more difficult for a tarot reader to work with oracles? Everything depends on the oracle itself, its structure, subject matter, and ones understanding of this subject. A person who has thoroughly studied at least five different tarot decks and has been successfully practicing for at least several years can deal with absolutely any oracle.

But it is often more difficult for a beginner to work with narrow-themed oracles, although at the same time simple decks based on very understandable symbols (for example, the Small Deck of Lenormand), on the contrary, will turn out to be even easier to learn than the classic Tarot. The more developed a person’s imagination, intuition, and the ability to see in each symbol not only one meaning but at least several, the more successful his work with an oracle or oracle deck will be.

What to choose – Tarot or Oracle Cards?

Oracle cards contain a set of symbols and pictures, with the help of which a person receives an answer to his questions. With their help, you can find out what awaits a person in the future or deal with pressing problems, as well as understand yourself better.

The deck of Tarot cards differs from the Oracle because it has clear structure and a certain order, where every detail matters.

To begin with, there are several main schools in the Tarot. This is the school of the Marseille Tarot, Etteilla Tarot, Waite’s deck, Crowley’s deck. Each of the decks has a clear structure. It contains the Major Arcana, Minor Arcana, and Court Cards.

Major Arcana are numbered from 0 to 21. Minor Arcana has four suits, as in playing cards. Each suit contains 11 cards from Ace to Ten. Each of the suits has a certain set of characteristics, each has its qualities. Each suit of the Minor Arcana has its own “Royal Court” – King, Lady, Knight, and Page. In some decks, these are Knight, Lady, Prince, and Handmaiden. As a result, we get a deck of 78 cards. Tarot decks are based on numerological, astrological, and other knowledge systems.

Card Oracles are not always structured. It can be a set of aphorisms, affirmations, symbols. Oracles “speak” to us in the language of fairies, flowers, trees, and even the “voices” of famous people.

Osho Cards – Osho Tarot Transformation and Osho Tarot Zen are an Oracle that contains the sayings of Master Osho. His students and followers have created a deck that helps you look deeper and understand yourself better. And, although there is a structure similar to the Tarot in these decks, it is still an Oracle.

This is one example where the Oracle is called Tarot. But the name is not the most important thing, is it? Both are predictive and self-knowledge systems. Each deck can have its focus. One will allow you to delve into yourself and meditate, the other better “works” with situations. It is important that your communication with the World, with your subconscious mind, is successful and as comfortable as possible.

How to read Tarot Cards?

The easiest way for a beginner is intuitive fortune-telling, in which the fortuneteller relies on the name of the card and his impressions of the image. True, there is a catch – the names do not always correspond directly to the “original” meaning. For example, the Death card does not have a negative color and does not even indicate that someone will die. Therefore, the best option is to study the description of the cards of the selected deck and work out each of them on an emotional level.

The process is quite simple, you ask a question, draw out one or more cards, and get an answer. Only now, instead of minimalistic symbols with a written meaning, you interpret the whole image. It sounds complicated, but the activity is very exciting.

The deck layout is very simple. The fortuneteller will only need to choose the way of fortune-telling. Carry out everything as indicated in the instructions and read the value. The advantage of this method is that the interpretation is written on each card.

To start fortune-telling on Oracle cards, you should find out the rules of use:

It doesn’t take any special skill or knowledge to use Oracle cards:

For other simple, Oracle card advice check out this video.

NOTE: Although there are many divination tools and methods available, I prefer ceremonial magick. Demons, much like angels, aren’t constrained by time and space like us physical creatures. They stand above and beyond our world, in the astral realm. From this high vantage point they can see the past, present and future. This is why demons are so knowledgeable and why a demonically possessed person will often prophesize things or know past events that would otherwise remain inaccessible to ordinary consciousness. If you are by any chance interested in understanding your personal destiny, I can summon the powerful demon Astaroth to reveal the answers to your most urgent questions. See you on the other side!

2 thoughts on “Tarot Vs. Oracle Cards for Divination”