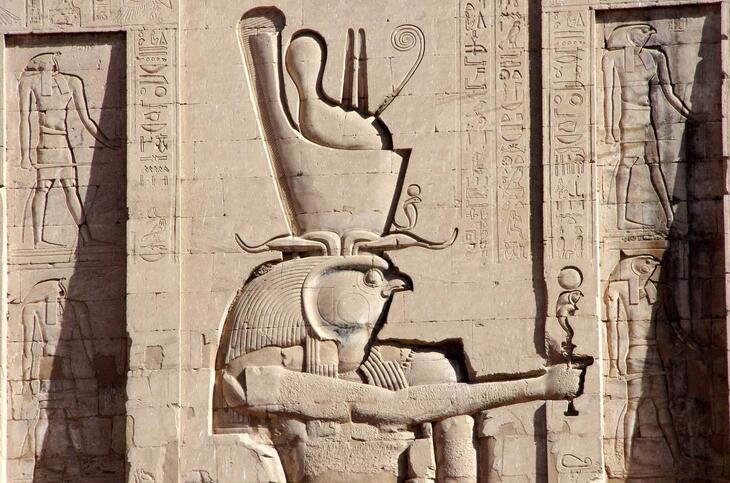 The Origins of Horus Worship

Probably, there is not a single person who has not heard about the amazing architecture and rich mythology of Ancient Egypt. The level of their culture was indeed very high, as was their understanding of the fundamental laws governing the human soul. The Egyptians had a developed system of beliefs, rites, rituals, worship, and offerings.

Only initiates from the priestly caste knew and understood the esoteric meaning of ritual magic. Each deity they worshiped embodied an eternal and unchanging, but different divine quality. In modern terms, ritual magic helped to expose that psychic function or archetype that the ancient magicians considered the key to understanding the divine order. One of the highest gods of the Egyptian pantheon was Horus.

The traditional representation of the god Horus is the falcon, or a man with the head of a falcon. Horus is the patron saint of pharaohs, wisdom, strength, and protection. The Egyptians believed that the pharaohs, as the deputies of the gods on Earth, are the reincarnation of the higher gods, for example, Osiris, Isis, or Horus.

The head of the hawk represented the qualities that the magician must achieve before starting the ritual. Namely, the sharpness and clarity of thinking. The cult of Horus was also practiced outside of Egypt throughout antiquity. Working with Horus continues to be popular in the occult circles and is gaining traction in the mainstream as people continue to explore alternative forms of spirituality.

Apart from the falcon, hawk, or lion, Horus is sometimes depicted as a baby on a lotus petal. Like a new beginning of life, it personifies the state of total purity of consciousness. This state is also known as a stop of the internal dialogue. It is the starting point for many occult techniques, allowing you to tune your perception to a particular deity. Horus is the god of the sky, or the infinity of human freedom. The stars, moon, and sun obey his will. This is the sharpness of perception over which time has no power. And of course Horus has always been associated with magical arts.

The second attribute of a strong magician is unbending intent. Horus was also considered the god of war. Recognizing and applying such qualities as moderate agression, strength, and perseverance, the practitioner embodies one’s intentions into the fabric of magical reality. In other words, Horus favors those who are persistent in their desires.

Finally, the third and no less important attribute of Horus is insight and intuition. The ancient magicians used different terms, but the meaning remains the same. The all-seeing Eye of Horus meant universal protection, the ability to see the probabilities of different life scenarios, to avoid or attract the desired scenario.

The Eye of Horus endows the wearer with divine insight. This attribute can be drawn or held at the periphery of attention during the offering. Moreover, the Eye of Horus allows you to explain difficult things in simple terms and thus enlighten other people. Horus was also depicted as the rising sun, as the beginning of a new eternity.

The Reasons Behind Horus Worship

Comparing the religions and cults of the ancient peoples, we can see that mythology and psychology have always gone hand in hand. Each magical tradition has described in different ways the basic state of consciousness from which the practitioner is immersed in another, divine experience.

To discover and worship Horus is the same as discovering and worshipping hidden layers of your own divine identity. However, as with all worship of an externalized deity, we are embarking on the “wet path”, as it is known in alchemy, as opposed to the “dry path”, whereas the magician is entirely focused on his Self. Symbolically, Horus is the door to an infinite number of worlds, or the point of perception from which all else becomes possible.

Every practitioner must remember that communication with the gods begins with pure consciousness and inner silence. Meditation or the state of no thought plays a key role. To achieve inner silence, the practitioner can use several techniques. Let’s consider two of them. To begin with, you need to concentrate on the candle flame and observe it for at least 15 minutes.

This technique is not suitable for everyone, since it requires considerable experience and inner peace. If you notice that your attention is still eluding your control and the flow of thoughts resumes, you need to change your technique. Instead of focusing on the flame, try to sit in a comfortable position, turn on pleasant music, and light some incense.

Unlike the first technique, you do not need to control your thoughts. Let them flow freely in your mind without trying to evaluate or change them. As a rule, within 15-20 minutes of such relaxation, the practitioner enters a state of mindfulness. Then the consciousness of the individual passes into another mode, more receptive to subtle energies.

Glory to you, King of Gods

God of wisdom, God of holiness

I pledge myself to you, almighty Horus,

I pray to know your thousand names

I wish you look upon this world

As I am following thy words

Immerse and radiant you stand

Defender of the peace of mind

You sooth the weak and lift the brave

You fetter selfishness and ego

And you redeem one’s sins of past

Born from the darkness, a harbinger of light

You are a spear that yearns to fight

I honor you, almighty Horus

True king among the other gods

Bestow upon me things I wish the most

Your wisdom, your integrity, your grace

And I will serve your majesty

Until the end of days

I pray to you my Lord

In your divine presence

Strike me with your sword

Leave me not ignored

Enlighten with your wisdom

That calls to be explored

These are my humble offerings

That I have brought with me

Here I conjure you, let me see

A divine image in tranquility

Ritual for Horus: Step by Step

You can perform this ritual to connect more strongly to Horus and his energy and to approach him for answers and help. This is a ritual that requires making an offering, based on the traditional form of approaching this particular deity.

At the first stage, it is necessary to visualize the image of Horus and remember each of his attributes. The quintessence of his three qualities allows consciousness to acquire a basic, stable position. At this stage, you can work either without an altar, or with an altar, applying multiple images of the Eye of Horus. You can take crystals (quartz, beryllium, moonstone) or plants (acacia or olive branch) to enhance the magical resonance with your god. The attributes of Horus can be of any shape or color.

You need to choose a quiet place where no one will disturb you. Silence and concentration should become your companions. You need to draw a circle on the floor with salt. It is important here that you be aware that the circle is the ideal shape that protects you from any interference. In the center of the circle, you need to reset your mind, light a candle, and imagine the Eye of Horus above your head.

When the place of the ritual becomes psychologically convenient for you and the attributes of Horus are in good visibility, you need to contact him with a question or request. Your question should be well thought out. You will possibly be open to other states of consciousness under the guidance of Horus and this can be experienced as visions, tranquility or a state of bodily possession by the deity.

Worshipping Horus is always a leap into the unknown, but from the unknown emerges the light of knowledge and truth. For this reason, the ancient Egyptians considered him both the protector (of sanity) and the god of war, who liberates us from ignorance so that we may embard on new journeys.

Finally, the ritual must be completed with an offering to Horus. It can be food, mainly red meat, or fruits, berries, and vegetables. Crystals, stones, or talismans also work well as offerings. The other side of Horus is his appetite for warfare, so weapons and any iron products are also suitable. Sun and moon signs, either on paper or wood, can also be offered.

In the end, the practitioner needs to blow out the candle and thank Horus for the ritual experience and the deity’s blessings.

The Eye of Horus: A Symbol Higher Intuition

Gods, demons, angels, and other beings of the astral world often don’t use words, unless they wish to speak with us directly and assume our means of communication. Instead, they act and allow us to garner wisdom from their actions, if we have the capacity to do so.

From connecting with Horus on a deeper level, you will likely receive guidance regarding your deepest questions and concerns by acquiring higher intuition about events, people, and coincidences that occur in your life. You will be able to piece them together and find the spiritual influence behind them, read the message and act accordingly in the future for your ultimate benefit.