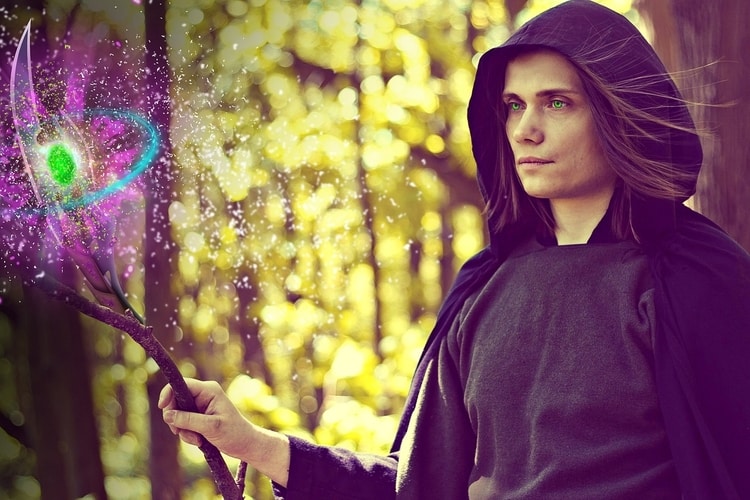 Magic or magick as I prefer to call it to distinguish it from things like card tricks, is a collection of occult techniques for changing reality. Aleister Crowley defined magic by saying: “Magick is the science and art of causing change to occur in conformity with will.”

Beginners can learn magic by reading books and watching video courses on magic. Grimoires are books with instructions on how to perform spells and rituals. Many of these can be practiced at home, alone or in a group setting to get better at magic.

Here are more detailed tips on how to learn and do magic as a beginner.

1. Ask a magician to mentor you

It’s always valuable to learn from someone with more experience. So if you can meet up with someone who has experience it is the ultimate way to develop.

However, while good magicians can be hard to find in person, there are thousands of mentors that can teach you indirectly everything you need to know. Of course, I’m talking about occult books and video courses available online and even in your local library (in case of books).

You can start your journey by exploring the general info about magic to get a better sense of it. Alternatively, pick a more narrow topic that interests you the most. Some sub-categories within magic worth exploring:

Both learning styles or their combinatoin can work well. You need to find the approach that is best suited to your personality, based on your level of patience, interest, intelligence and insightfulness.

2. Focus on theory and practice equally

Many beginners in magic focus on theory way too much, instead of actually performing spells and rituals. It’s best to divide your learning into two parts: 50% reading or watching content on magic, and 50% of putting this newly acquired knowledge into practice. Pre-modern people considered the mind to be located in the heart region, not in the head.

There’s a good reason for this: they believed that real knowledge has to be internalized and become part of us. It’s not enough to just think about it. Many people will tell you the theory on how to make a million dollars, but there are very few millionaires out there.

Chances are that the people who think that they have the knowledge would fail at implementing it because it takes practical experience to become good at something.

The same is true for magic. Don’t neglect your practice sessions! Instead of just reading about tarot cards, try to divine people’s destiny as well. Instead of reading about demons in Ars Goetia, summon one of them to do your bidding etc.

3. Improve your physical and mental state

Another common mistake made by beginners is neglecting their physical condition. Here’s the problem with that: If your body and mind are out of shape, you will have a hard time concentrating and getting into subtler states of mind.

If you’re in good shape, you’ll be able to relax while meditating, casting spells, visualizing objects, performing summoning rituals etc. It will also be easier to astral project and lucid dream.

I’m not saying you should become a combination of Arnold Schwarzenegger and Osho, but definitely try to optimize your health to support your magic practice.

Performing cardiovascular exercises such as jogging and swimming, perhaps some calisthenics or weightlifting as well, in addition to 10-20 minutes of meditation can go a long way to making you a more effective magician.

Don’t tell people close to you that you’re learning magic or performing it. Unless you’re pretty sure that they would be comfortable with that. To be honest, magic is a taboo subject in the modern world.

Some people will think you’re nuts because they think magic is a superstitious pre-modern practice that has no backing by science. Others will think you’re an evil person and will become scared of you, even though magic is morally neutral, it can be used for good or evil just like anything else.

Personally, I’ve shared my magic practice to some degree to a few close friends, but most people have no idea about it and it’s probably best that way.

The biggest misconception that beginners have about magic is that magicians summon demons to physical appearance and cast fireballs all the time. That’s nowhere near true. Magic is for the most part a mental practice.

Let’s say you perform a ritual to summon a demon or an angel. The success of this ritual isn’t based on whether this entity becomes visible to you. It’s a success if you get what you want from the interaction. So you’re not summoning a spirit to see how it looks. You’re doing it in order to receive assistance in some practical manner. It could be business advice. Or help with losing weight. Or maybe you want a love interest to like you. If any of this happens, you can say that the ritual/spell has worked fine.

The proof is in getting what you want! It doesn’t have to happen through some flashy manifestation to be considered magic (although sometimes it is). Remember: “Magick is the science and art of causing change to occur in conformity with will.” The end result is all that matters.

6. Dress nice and be respectful to spirits

This might seem silly at first, but think about it for a second. Do you go to an important business meeting or a religious ceremony in flip flops? Probably not, if you’re serious about it.

Treat your magical practice with the respect it deserves and spiritual entities will be more likely to intervene on your behalf. This goes for beginners and more advanced magicians.

There’s a good reason why priests and magicians wear fancy robes during ceremonies. It creates a certain atmosphere. Just as wearing an everyday hoodie will entice you to behave in a relaxed manner, wearing a magic robe will prepare you for creating the greatest ritual ever.

7. Write your experiences in a magical diary

If you live in a large urban area chances are that there is a coven or an occult group accepting new members. Consider joining or just having a friendly chat.

9. Create a ritual space or altar

Most spells and rituals can be performed just about anywhere, as long as it’s a quiet area where you can concentrate and be alone. It could be indoors or outdoors. Yet, it’s best to have your own regular space where you’re most comfortable and can use ritual items with ease.

If you access to an abandoned castle or ancient ruins, of course you should use them. The atmosphere in such places will improve any magical dealings by tenfold. If you don’t have such a (rare) privilege, consider dedicating one room in your home for your magical practice. If that’s not an option, perhaps just a part of your bedroom will do.

You can decorate and equip your ritual space with candles, incense, crystals, scrying mirror, sword, dagger, staff, wand, herbal remedies, grimoires, magic circles and any other additions you find satisfying and useful for conducting your rituals.

If you’re a complete beginner, don’t worry. Once you start practicing you will find some items more enjoyable and useful than others. It’s a very subjective thing as it’s largely based on your personal style as a magician. Some magicians are very minimalist by nature, while others create lavish ceremonies with many items.

If you find that your rituals and spells are not delivering the results you’re after, don’t panic or get disheartened. It’s a hit and miss, especially at the beginning as you’re still honing your skills. Just as you wouldn’t expect a complete beginner in painting to create Mona Lisa, don’t expect too much from yourself in this brand new art. Therefore, the term “occult ART” is completely justified.

The difficulty is most of all in the lack of objective criteria. Sometimes you will think that you felt something during the ritual, as if there was a spiritual force in your ritual space, but it could really be the case of self-deception.

In most cases, new magicians require some practice time in order to focus on the right things when conjuring spirits and casting powerful spells into the external world.

Want to learn magic from experienced occultists online? Here is my list of the 7 best magick video courses available online. You can access these courses immediately and reap the rewards of improved magic skills and esoteric knowledge. Talk to you soon!