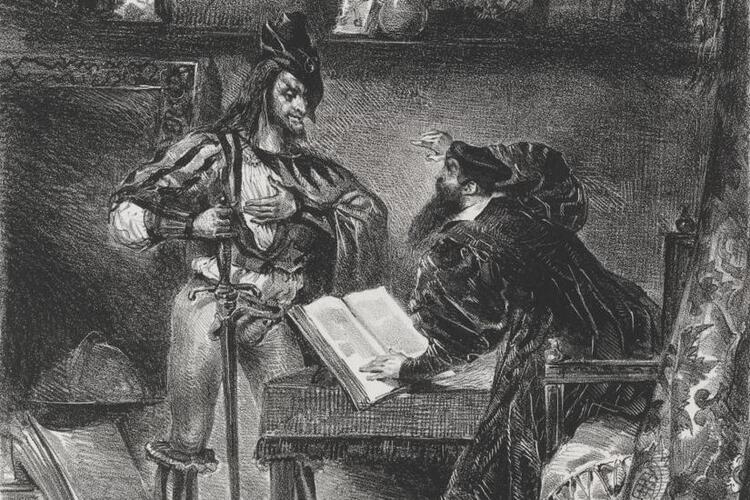 In this article I will share a step-by-step approach to making a pact with Lucifer. The same approach can be used to create a pact with any other demonic entity, although the specifics will differ.

Whenever you create a pact it’s important to identify the right spirit for the task. Lucifer, being a chief spirit in the demonic hierarchy can assist with almost anything that you need. But more experienced magicians often prefer working with other demons that are lower in the hierarchy because they are easier to summon and they are often more specialized for specific tasks.

The Difference Between Pacts and Summoning Rituals

Many people can’t distinguish between a pact and a summoning ritual. I get this question quite often through my request a ritual service. I will make the explanation as brief and simple as possible to hopefully clear up the confusion.

The main difference is that a summoning ritual doesn’t bind you to the spirit in any formal sense. You’re not obliged to do anything in return for the help that you obtain from the spirit.

You can also banish the spirit at any time through a symbolic gesture or a more elaborate ritual, if you feel that its influence is no longer necessary. You might feel that way if you decide to focus on something different while the demon’s influence is still at work.

At the same time, the spirit is not formally obliged to provide you assistance either. If summoned correctly it will, especially if done by someone who’s already established a good connection with the spirit. But not to the extent and precision that it would be obliged to had a formal pact been established.

In comparison, a pact includes a written contract whereby you promise to do or give something in return for the help provided by the spirit. The exchange has to be of equal value. The main obstacle that a pact maker will face is how to make a proper evaluation.

So if you truly believe that selling your soul for one million dollars is a good deal, you can only ask for this amount or less. It’s important to be honest when writing the pact because it’s impossible to hide your real thoughts and feelings from a powerful spirit like Lucifer.

Things You Can Offer to Lucifer in a Pact

It is worth noting that “selling one’s soul to the Devil” is an exaggerated example of a pact in popular culture. While the soul is the most valuable thing that every human possesses, there are certainly other things that can be offered to a spirit.

As I’ve mentioned in some of my previous writings, every spirit wants to spread its influence so that more people perform rituals, create pacts and worship at its altar. When this happens the spirit grows stronger. It goes without saying that it’s in every spirit’s interest to grow stronger and to have more worshippers or magicians relying upon it. So, one thing you can is to be an ambassador for the spirit in this reality.

However, instead of making a vague promise, you need to provide facts and figures in the Contract. Promise to convert/convince an X amount of people. Again, how many you’ll need will depend on the honest evaluation based on what you want to receive. If you ask for a million dollars, that might require a lot of ambassadorial work on your part.

The Step-by-Step Process for Creating a Pact

Creating a pact is a 3-step process:

Regardless of whether it’s Lucifer or some other demon, you need to summon it first. Without a summoning ritual there is no way to ensure that the demon will be present during the creation of the pact. I’ve shared plenty of beginner-friendly summoning rituals on this website and in my books. Here is a ritual for Lucifer.

It goes without saying that these aren’t the only rituals that exist. There are more complex rituals that aren’t available publicly. It would be pointless to share them as they require initiatory knowledge and a complex ritual setup.

After the ritual is performed and the magician is certain that Lucifer is present in the ritual space, the writing of the Contract can commence.

Sometimes simply called a Contract, it is also known as a Blood Pact. It can be written on yellow or white paper/parchment using a black pen or ink.

The first part of the Contract should be written from the perspective of the spirit. It should state that the spirit promises to do the thing it was summoned for. It is typically 1-3 paragraphs long, but there is no strict rule about the length.

The second part is written from the perspective of the person making the pact. It should state what the person promises to do in exchange for the spirit’s help.

At the end of the Contract and typically on the right-hand side the spirit’s sigil should be either drawn or stamped. Next, the person should prick their index finger with a needle and sign with their initials over the spirit’s sigil.

All of this can be performed during the summoning ritual after the spirit’s presence has been confirmed. The alternative approach is to prepare the Contract beforehand. It can be handwritten or written on a device and printed out.

After signing the Contract what remains is to store it properly, the sooner the better. The most important aspect of storing the Contract is to ensure its protection and inaccessibility both from yourself and others for a period of time. During this period the Contract becomes an axis or a focal point of the pact maker’s Universe. It is the gateway for the demonic influence and shouldn’t be disturbed.

There aren’t any strict rules for storing a Contract, but the most common approach is to bury it in a remote location in a sealed bag, folder or a box. For example, to ensure that the Contract remains inaccessible, you can venture into a forest and bury it in a random spot that you won’t be able to find later.

There are situations where people have tried to retrieve their Contract due to paranoia or curiosity and they could no longer find it. It is possible that they simply forgot the location, or that the Contract was “spiritually absorbed” after a sufficient amount of time had passed. The latter is more than likely due to the magical properties of the Contract. As the demonic influence becomes fully integrated into one’s reality the Contract no longer acts as the “gateway” or “portal” and vanishes.

This final procedure is done both to ensure one’s commitment to the pact and so that the process of integration can play itself out fully.

Hopefully this article has cleared up some common misunderstandings about making a pact with Lucifer and other spirits. And I do hope that I’ve expanded your intellectual horizons in regards to this topic as well. There is a lot more that I could say about this but I’ll save it for a later date.

While you are free to try and make a pact on your own, due to the complexity of the procedure I don’t advise doing so unless you’re an experienced ceremonial magician. Pacts are more serious than summoning rituals due to their formal nature and the required additional steps. It should also not be forgotten that not keeping your end of the bargain can lead to some unfortunate consequences. If the procedure ends up producing some results you will want to make sure that everything was done properly.

The best way to ensure that the process goes smoothly and that you get your desire fulfilled is to work with an experienced ceremonial magician. Thankfully, you’re at the right place. I’ve successfully performed pacts for myself and for others who’ve reached out to me in the past. That includes all of the above steps, except for storing the pact, which you’d have to do on your own. So if you want my professional help with making a demonic pact, you can use my request a ritual service. See you on the other side!

3 thoughts on “How to Make a Pact”