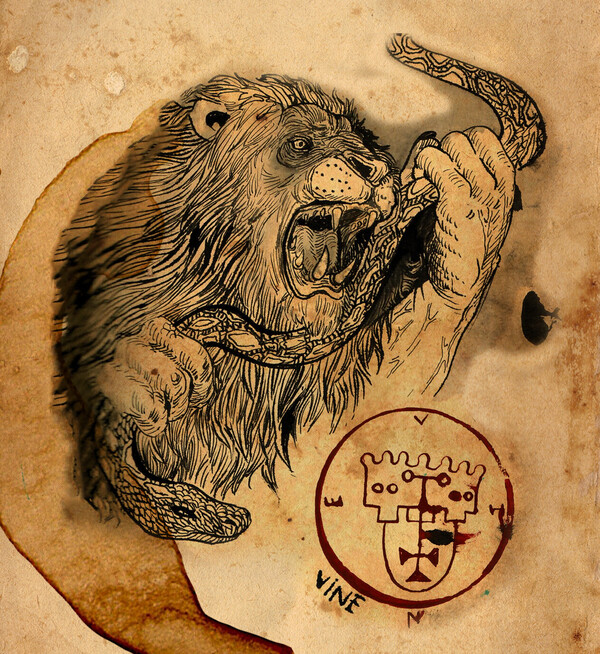 Vine is a demon listed in demonological grimoires such the Lesser Key of Solomon, Johann Weyer’s Pseudomonarchia Daemonum, and Jacques Collin de Plancy’s Dictionnaire Infernal. These texts rank Vine as a King of Hell commanded by Satan, but also listed as an Earl. He leads 36 legions of Demons.

He is called the Revealer, because he can reveal to you any secret concerning your personal affairs. He is known to be the trickiest, and deadliest Demon. He has the power to build towers, destroy walls, disturb seas, and furthermore answer questions on secrets, witches, and even past, present and future.

Vine may be derived from or otherwise connected to the spirit “Royne” in the Liber Officiorum Spirituum, who is described only as an earl appearing like a lion-faced soldier ( riding a black horse and carrying a snake). Royne is given the power to build not only towers but houses. Furtheremore, he can answer questions on treasures or secrets, has love magic, the ability to destroy enemies and consecrate objects (books especially).

Vine often appears in the form of a humanoid lion with a great mane that covers his whole body, long and sharp claws and fangs. He has flaming eyes and holds a serpent in the right hand. On the other hand, some magicians saw a naked man with a lion head riding a black horse.

Remember that the appearance of the demon is closely linked with the preconceived notion that the summoner has of the demon. Vine is a perilous Trickster Demon capable of altering his form, providing him with multiple forms of manifestation. Therefore, Vine has revealed himself to many magicians as someone familiar to them. I’ve summoned Vine on multiple occassions. When I wanted to learn more about a specific form of magic, to discover false friends and traitors in my organization and to protect myself from the black magic of others.

Vine probes deep into the conscience of the human beings, pushing them to reveal their deepest and darkest secrets. He can influence both mind and matter to break you. He is said to bring true answers about questions on secrets, witches, and even past, present and future but, as a payment, he can drain you of your vital energy, leaving you weak and confused for a long time.

The behavior, benefits and the perils associated with the demon will be coherent in every case. When summoning Vine, it’s important to keep close to yourself a metal bowl, possibly silver, containing water, mallow petals and mallow oil, as an offering to him.

He appreciates when time is spent gathering or harvesting these offerings. So you should take some time to at least pick the flowers or even make the Oleum. Self made oleums are always a good choice for offering because each mixture will contain plant matter (such as mallow for Vine) and essences formulated specifically for that demon.

As long as you’re respectful to demons and take the preliminary precautions as mentioned here, you have nothing to fear as their primary intent is NOT to harm the summoner. But be wary, Vine is cruel, powerful and cunning, even for the standards of a King of Hell.

According to the Daemonolatry Goetia and the Lesser Key of Solomon, the best time for summoning Vine to uncover hidden enemies or discern the past, present, and future’s on Sundays between 10 and 11 am. The best days to call upon him are between the 11th  and the 20th of June, while others pray to him between November 2nd and 6th.

While these are the best times, they’re not the only times when the demon can be summoned. Same is true for other demons as well. If you can place yourself in the right mental space and you perform the ritual perfectly, it will yield results regardless of the specific time and date.

Note: This is by no means the only Vine ritual out there. There are many others. But it’s simple and safe enough for me to share publicly. I use more elaborate items, magic circles, triangles and a host of other ceremonial magic skills when conducting rituals for myself and for my clients. You can use my request a ritual service and I will perform a ritual with the utmost efficiency on your behalf. See you on the other side!

One thought on “How to Summon Vine: The Unraveling Ward Evocation”