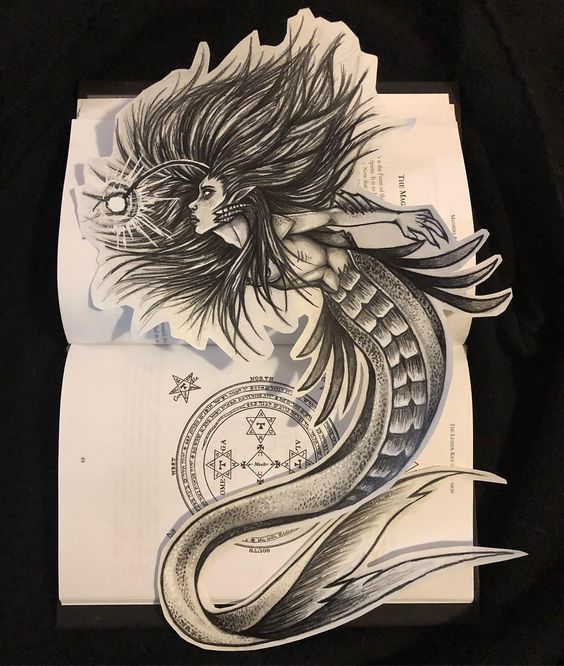 Vepar (image source) is a very interesting and unique demon from Ars Goetia. While all of the 72 demons appearing in this popular grimoire are invaluable allies for self development in the most positive sense of the word, Vepar is also a valuable companion for more sinister purposes which we’ll discuss further down in this article.

Here is Vepar’s description, which explains some very good reasons for summoning him/her:

The 42d spirit is Named Vepar, he is a great and strong duke, and appeareth like
a Mairmaid. His office is to guide the waters and ships. Ladden with armour thereon
he will at the will of the Exorcist cause the seas to be rough and stormy, and to
appeare full of ships. He causeth men to dye in 3 days by putrifying their sores
and wounds and causing wormes in them to bred. He governeth 29 Legions
of spirits.

From this description we can deduce that Vepar’s two main powers are:

It’s important here to realize that waters and ships are used in allegorical sense. Waters are in alchemical and magical texts symbolic of the psyche and emotions. In that sense, Vepar can stirr one’s emotions or keep them calm.

Ships symbolize one’s goal and journey towards it. Vepar can guide a ship safely through difficult conditions. As far as the second power is concerned, it’s more straightforward. Vepar can be summoned to cause harm to enemies, physical and psychological.

It’s important to remember that black magick is strictly advised against because it often reflects back on the spellcaster. In other words, if you wish someone harm, it will happen to you as well. Only truly powerful magicians are able to protect themselves against the karmic laws, after they’re evolved to a supra-human form beyond external contingencies.

However, everyone has their own decision to make, and I’m simply sharing information for those of you who are interested in it. To quote Aleister Crowley: Do as you Will shall be the whole of the Law.

So here’s a Vepar summoning ritual you can perform to contact this powerful demon.

You can either print his sigil or draw it on a piece of paper. Try to make it resemble the original as closely as possible. Btw. Vepar is depicted as a mermaid, but he is referred to as a masculine demon. This isn’t an important point, I just wanted to point out that the gender of this demon is rather ambiguous.

A blue candle symbolizes the psyche in its active state.

3. Drown the sigil in the glass of water

While repeating the enn, also pour candle wax unto it. This action will serve to calm the overactive psyche, soothing your emotional state. If you are using this ritual for black magick purposes, visualize taking control of the enemies emotional state as you pour the wax over the drowning sigil.

4. Pierce the sigil with the ritual dagger (optional)

This is an optional step of the ritual, only to be performed if you want Vepar to act offensively against someone. In that case visualize your enemy and the thing you wish to happen as you stab the sigil. It’s enough to do this once. This action acts as a release of the demon from the sigil and into the physical realm.

Recite the following incantation to end the ritual:

You may dispose of the water and the sigil after reciting.

Vepar can be a great emotional support, stabilizing your psychological state, especially during troubling times in your life. He can clear emotional obstacles as you travel to your destination, both literally and metaphorically speaking.

Since the waters are the psychological substratum that all humans share, similar to the collective unconscious of Carl Jung, we are able to cause psychological and physical effects on others by manipulating the waters, causing rough seas on some part of that vast ocean where the enemy is sailing.

Hopefully you won’t have to resort to such measures to resolve your differences with others, but Vepar can certainly make a worthy ally if that is your only option.

If you want to learn more about summoning various spirits I suggest checking out the Mastering Evocation course. It is a 13 hour video course with tons of extraordinary information on summoning demons, angels and other forces that lurk in our midst. Talk to you soon!

4 thoughts on “How to Summon Vepar: The Drowning Ritual”

link to Demon Hierarchy & The Significance of Legions

The world of Demons is a very structured and hierarchical place. There is a practical reason for this, which will become evident in a moment. It is said that knowledge is power, and this applies...

Continue Reading
link to The Art of Summoning: A Poetic Tribute