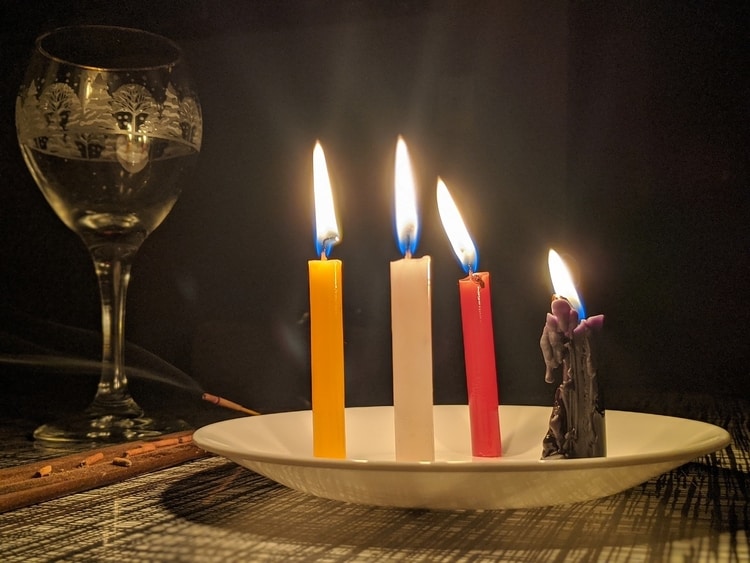 Words evocation and invocation can be confusing to many people, because they’re used almost interchangeably in the context of summoning spiritual entities and forces. Sometimes you might read instructions in a grimoire “for invoking a spirit”, other times you will read “for evoking a spirit”.

Both of these occult terms signify “summoning” of some spiritual force. Invocation refers to embodying the attributes of a spirit. Evocation means to summon a spirit as an external force or entity.

A (grossly exeggerated) example from pop culture of a demonic invocation is to be found in the horror movie Hereditary.

In Hereditary, an occult group is trying to invoke a demon called Paimon into an unaware person, so that the demon becomes that person, and vice-versa.

However, the invocation depicted in Hereditary is more of a demonic possession than an actual invocation, because the intention is to use the person as a vessel for the demon, so that the demon controls the person’s mind and body.

In actual invocation rituals performed by real life occultists, the goal is to embody the attributes of a spirit AND to remain in control at all times.

The best way to understand something is through practical examples. Thankfully, I have the perfect example for you: Lucifer summoning rituals.

In recent past, I shared two summoning rituals for Lucifer, one is an invocation and the other is an evocation. Both are available for free in the following posts:

How to Summon Lucifer: The Seven Spheres Ritual

To put it in the simplest way possible, if you invoked Lucifer successfully you would embody his attributes. For example, an urge to rebel against all authority and craft your own destiny and/or a desire for knowledge and enlightenment (Lucifer = Light/Knowledge Bringer). In other words, you would become Lucifer made in flesh, taking on the archetypal features.

In comparison, if you evoked Lucifer, you wouldn’t necessarily create this substantial inner change. Instead, Lucifer would act as an autonomous spirit guide on your life journey, assisting you with accomplishing tasks that relate to these or similar attributes.

Invocation however, often contains both the benefits of assimilating archetypal features and changes in the external environment in line with this inner transformation.

For the sake of further clarification, we can use another famous spirit as an example. Mammon is the ancient Phoenician god of wealth. He was later transformed into a demon of avarice or greed, and as such we find him in many grimoires (magic manuals). If you were to invoke Mammon, you would become very motivated and skilled in making money. If you evoked Mammon, you wouldn’t feel this mental and spiritual urge, but Mammon would still create new opportunities for generating wealth or provide advice on such matters.

How to Summon Mammon for Money and Power

There are MANY angels, demons and other spiritual entities that you could communicate with. For example, archangel Raphael is often summoned for healing, demons Sitri and Zepar for attracting lovers etc… In all cases of summoning spirits, the same logic that is presented in this article applies.

When to evoke and when to invoke a spirit

The explanation presented above might seem vague at first. Why does it matter if I evoke or invoke a spirit like Mammon, as a basic example? I just want to become rich, doesn’t matter in what shape or form Mammon helps me get there faster!

But think about it more deeply. Do you REALLY want to become obssessed with making money, which would be the final goal of invoking Mammon? Remember that obssessions are unhealthy, and may strip you of enjoyment in other areas of life as you focus on a single objective. If you focus too much on money, you might become filthy rich, but at what cost? You might discover that money no longer represents the ticket to paradise you once imagined it was because you no longer enjoy anything other than making money. You’ve become Mammon, enslaved by gold.

So think deeply about embodying/invoking a particular spirit, if it’s something you really want or it’s just an idea that seems exciting in the present moment but you would regret later on. Of course, there are ways to banish spirits in case you regret it, but why put yourself through any unnecessary and painful process in the first place?

Likewise, think deeply about evoking a spirit. Do you want Mammon to create sensational money-making opportunities for you? Are you ready to grab that opportunity with both hands and work hard? In other words, are you really interested in changing your lifestyle, are you motivated enough for achieving this particular goal? If you’d rather party hard, chase tail or read occult classics, perhaps Mammon would be a negative distraction in your life. Like providing situations to make more money, but if that’s not something you want to do, it could be a nuissance.

In other words, regardless of whether you’re trying to invoke or evoke a spirit, first you need to be confident that the spirit’s attributes align with your goals. In other words, your goal should come before. Only then perhaps you should consider summoning a spirit to assist you with obtaining this goal. Not the other way around.

Beginner magicians sometimes just want to summon a spirit because it looks exciting, not for any practical reason. Do what thou wilt, but don’t be surprised if it actually works and then you’re stuck with effects you don’t actually need or want.

Limitations of Will and Energy

It’s very important to realize your true capabilities before either invoking or evoking a spirit. There is a very true saying that one would be smart to often remember: “Energy flows where attention goes.” With this in mind, let’s examine some typical errors that are made when summoning spirits and how to avoid them.

How an invocation of one spirit works

Let’s say that 40% of your energy is spent on work, study or whatever. You have 60% of energy left (and I’m probably being generous here). If you were to try and make money without summoning Mammon, you might be able to spend 30% of that energy, because your attention wouldn’t be as centered on that task. Your willpower would not be sufficient to use all 60% of your energy.

However, if you were to invoke Mammon, you might be able to use 50% or even your full potential of 60% on making money. Perhaps even use some of that other 40% that you usually spend on doing other things.

How an invocation of two spirits at the same time works

How an invocation and an evocation at the same time works

You might be wondering if it’s possible to both invoke and evoke a spirit like Mammon at the same time. So you would invoke Mammon to embody his attributes, and you would evoke him to open up opportunities. To be frank, there’s no need to do this. Invocation already contains the properties of evocation. It is only that you would perform an evocation to prevent the inner transformation from happening. The effects on the external world will happen in both cases.

Another example is summoning two different spirits, one invoked, another evoked. For the sake of continuity, we can use Mammon and Lucifer once more. If you were to invoke Mammon, you would gain the mental benefits and external-world benefits of the invocation. By evoking Lucifer, you would simply create two diverse paths to follow. One would be based around making money, the other around rebellion/spiritual enlightenment. Again, there is no point in doing this, as it would only bring about confusion in your life.

The only exception is if your goals are highly complementary. Let’s say that you want to make money through spiritual enligthenment. Lucifer could help you obtain higher levels of spirituality while Mammon could help you monetize it, perhaps by becoming a guru to thousands or millions of followers. However, even in this case it would probably be best to focus on one task at a time.

The Difference in Intensity and Duration

Another often overlooked difference between evocation and invocation is that of duration of effects and their intensity. Invocation is supposed to create a continual effect on the magician. To follow up on our previous examples:

Mammon evocation: Receive a one time answer or vision regarding finances, or receive one time monetary assistance, or a new money-making opportunity etc., but not a never-ending supply of mental stimuli as in the case of invocation

Lucifer evocation: Receive a spiritual vision, an insight, piece of advice, meet a spiritual master etc., but not a constant supply of Luciferian energy

So potentially, invocation would include both of these types of effects in equal fashion, or a predominantly invocation effect with some evocation effects but not to the maximum potential. There is some debate in regards to this question, so feel free to experiment and come up with your own conclusion on this matter.

I hope that this theoretical exposition hasn’t bored you too much. I remember being quite confused about the difference between these two terms myself not too long ago, so I wanted to make it clear once and for all.

Now, if you want to learn how to perform both of these rituals with the greatest success possible, each and every time, I highly recommend the Mastering Evocation course.

Mastering Evocation is a 13 hour long online video course featuring experienced occult magicians, performing various demonic and angelic invocations and evocations, with explanations throughout on why certain actions are being performed. You can replicate these rituals or incorporate them in your own magical system to summon various spirits and bind them to your will.